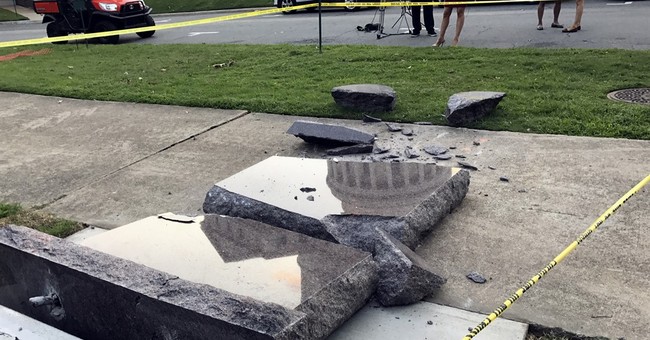 On Tuesday, a statue of the Ten Commandments was installed at the Arkansas Capitol grounds. Less than a day later, it had been run over by a car and destroyed.

Michael Reed, a 32-year-old from Van Buren, Arkansas with a history of mental illness, recorded himself ramming his car into the monument, shouting "freedom" shortly before impact. Reed has previously been accused of destroying a similar Ten Commandments monument in Oklahoma.

He was arrested shortly afterwards. He is facing charges of of defacing objects of public respect, trespassing on Capitol grounds and first-degree criminal mischief. He's being held without bail.

More for Michael Reed -- appears to be talking about after he ran into the monument in OKC pic.twitter.com/T0mXnLKOzP

Prior to his arrest, Reed created a GoFundMe page to crowdfund money to repair his car. He was seeking $20,000. The page appears to have been taken down and is not available.

Prior to ramming Ten Commandments monument, Reed appears to have started a GoFundMe account to replace his car. Seeking $20K. #ARNews pic.twitter.com/iK3aMahyqW

The monument was paid for by private donations.