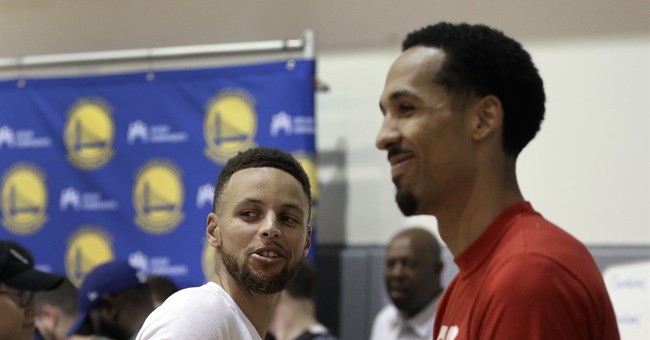 Golden State Warriors star Steph Curry said on Wednesday that he probably would not visit the White House if his team were invited, but would have to discuss things with the team before giving a definite yes or no answer. The Warriors won the NBA Championship on Monday night, defeating the Cleveland Cavaliers in five games.

In response, Curry said, "Somebody asked me about it a couple months ago, like a hypothetical, if a championship were to happen what I'd do and I think I answered 'I wouldn't go.' I still feel like that today."
Despite the seemingly resolute answer, Curry did leave open the possibility of being talked into the ceremony and possibly honoring the tradition.
"But obviously, as a team, we're going to have a conversation," Curry said. "This is a moment we all need to enjoy together. Nothing should distract from what we were able to accomplish together. And different kinds of ceremonies and traditions that have happened around championship winning teams, we don't want that to taint what we accomplished this year. So we'll handle that accordingly."

Shortly after the game ended, there were unconfirmed reports that suggested that the entire team had "unanimously decided" that they would not visit the White House for the customary post-championship visit. These turned out to be false, and the team clarified with a statement saying that they had not yet been invited to visit and therefore had not made a decision on whether or not to go.

Conversely, the Pittsburgh Penguins' CEO (who is a Democrat and formerly worked for Bill Clinton), said that his team would visit the White House if invited. The Penguins won their second Stanley Cup in a row on Sunday.