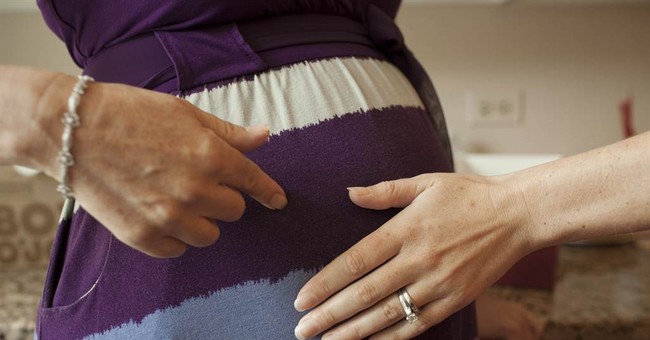 Maddi Runkles is an 18-year-old straight-A student who attends Heritage Academy, a private Christian high school in Maryland. She's also pregnant and due to give birth to her son on September 4, and because of her pregnancy, she is not being allowed to walk at graduation. Runkles' story first broke last week, and her school is not backing down. In fact, her principal issued a letter to the school community saying that Runkles is being punished for her "immorality," not pregnancy, and the school will not re-consider its decision.

Despite a public outcry and growing pressure from national antiabortion groups to reconsider, Heritage Academy in Hagerstown says that senior Maddi Runkles broke the school’s rules by engaging in intimate sexual activity. In a letter to parents Tuesday evening, school principal David R. Hobbs said that Runkles is being disciplined, “not because she is pregnant but because she was immoral. ... The best way to love her right now is to hold her accountable for her morality that began this situation.”

When Runkles first told her school she was pregnant in February, she was initially told that she would not be allowed to attend classes and would have to finish the year at home. Heritage Academy has a school code that forbids premarital sex, drug use, and the consumption of alcohol, among other things. Eventually, the school relented and allowed her to attend class, but stripped her of her role as student council president and told her she was still not permitted to attend graduation. To confront rumors, Runkles addressed her entire school at an assembly and informed them of her pregnancy, and asked them for forgiveness.

According to Runkles, other students who have broken rules were still permitted to march at graduation. She believes she's being targeted as her pregnancy is visual reminder that she made a "mistake."

Students for Life of America is hosting a graduation party for Runkles. Other pro-life groups have issued statements in support of Runkles, saying that they were glad she chose life for her baby.

The father of Runkles' baby is not a Heritage Academy student.

Obviously, this is a tough situation. Nobody wants to be 18, unmarried, and pregnant, and Runkles should be commended for choosing to give life to her unborn baby. This being said, her school is being absolutely absurd. She is not bringing shame to her school by being pregnant out of wedlock--Heritage Academy is shaming itself by how they're treating a vulnerable teen. This is not the Christlike thing to do. People make mistakes. Humans are sinners by nature. Sometimes these mistakes have lasting consequences--and in this case, Runkles got pregnant. Instead of providing a life-affirming culture at her school, they're shaming a girl who made a very courageous choice when she could have gotten an abortion without anyone knowing the difference. That's despicable--enough is enough.