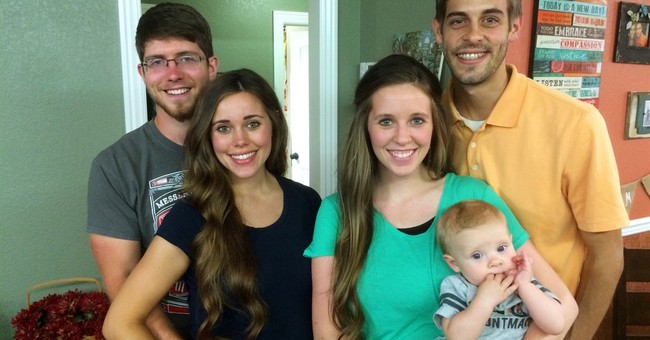 Four members of the Duggar family are suing the city of Springdale, Arkansas, Washington County, Arkansas, and the publishers of InTouch Weekly for revealing that they had been molested by their elder brother, Josh Duggar. Jill Duggar Dillard, Jessa Duggar Seewald, Jinger Duggar Vuolo, and Joy Duggar filed suit on Thursday. They allege that their right to privacy was violated when a document containing enough information to identify themselves as their brother's victims was released following an anonymous tip. The women say that they were promised that those documents would be kept confidential.

Jill Duggar Dillard, Jessa Duggar Seewald, Jinger Duggar Vuolo and Joy Duggar are suing the city, the county and the publishers of InTouch Weekly for breaching their privacy.

They allege city and county investigators promised them confidentiality. That was after an anonymous tipster reported the girls had been molested by their brother. They allege that the city and county breached that promise when documents were released to the magazine containing enough information to identify the sisters.

Following news that Josh Duggar had molested several of his sisters, the show about their family, 19 Kids and Counting, was canceled. The show "Counting On," which focuses primarily on the lives of the older Duggar children, currently airs on TLC.

Julio Rosas
CNN Technical Director Admits What We All Knew What That Outlet Was Doing Throughout Trump's Presidency
Matt Vespa
Yes, What The Japanese Are About to Do...Is How We Got Godzilla
Matt Vespa
Republican Senators Eviscerate Biden's Decision to Withdraw Troops From Afghanistan
Reagan McCarthy
New Mexico Dem Governor Under Fire for Sexual Harassment Settlement With Former Staffer
Reagan McCarthy
Armed Citizens Protected Their Property in Minneapolis During Second Night of Rioting
Katie Pavlich
CARTOONS | AF Branco
View Cartoon
Most Popular