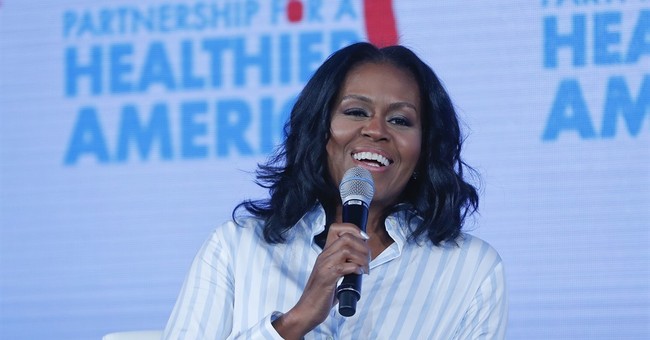 One of Michelle Obama's crowning achievements was the Healthy, Hunger-Free Kids Act, which revamped the school lunch program and update the various health standards for the meals.

Unfortunately, these didn't exactly go over well with students, who said they were hungry after eating the meals and found them to be lacking in both presentation and flavor. A hashtag game was even started, and there was a whole lot of wasted food as a result of the changes.

Had a very #healthylunch today. The apple definitely made up for the "mystery mush" #ThanksMichelleObama pic.twitter.com/RWCnQRCxJK

== #ThanksMichelleObama but no thanks.. stick to feeding your own family.. stay out of our kids lunches Parents can feed their own kids. pic.twitter.com/h24S41G38o

Given these facts, it's perhaps not a surprise that the Trump administration rolled back many of these changes. And boy, is Michelle Obama angry:

"You have to stop and think, 'Why don't you want our kids to have good food at school? What is wrong with you, and why is that a partisan issue?" Obama said at the annual summit of the Partnership for a Healthier America, a nonprofit that works with the private and public sectors to fight childhood obesity. "Why would that be political?"

It's not political if nobody is eating the lunches to begin with, and there's little evidence that these changes had any impact on childhood obesity. If anything, they potentially made things worse if children were eschewing school lunches to bring in unhealthier foods from home. Childhood obesity, and the obesity epidemic in America as a whole is certainly something to be concerned about, but there's no point in keeping a failed policy in place simply because it looks good.