Fake News: NYT Sports Tries To Use The Patriots To Slam Donald Trump; Gets Called Out By Team 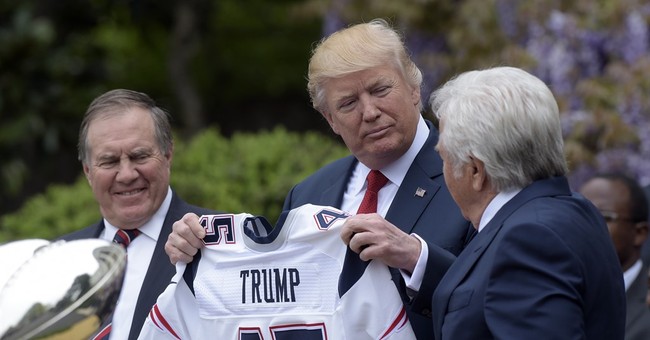 On Wednesday, the New England Patriots visited the White House to be honored for their victory in Super Bowl LI. Although several players announced that they planned to boycott the event for political reasons (and QB Tom Brady had to miss the event due to a last-minute personal family matter), the New York Times took the celebration as an opportunity to snark the Trump administration.

The NYT Sports account tweeted an image purportedly comparing the turnout the last time the Patriots won a Super Bowl to Wednesday, implying that more players than normal were skipping out on meeting President Trump. The tweet went viral, garnering over 44,000 retweets.

One problem: it simply isn't true. The picture of the 2015 event includes members of the Patriots staff, who were not present in the 2017 picture shared by the NYT. (When one zooms in, it becomes clear that everyone in the 2015 picture isn't actually a member of the Patriots roster--unless they've secretly had several women and older men on the team this entire time without anyone noticing.) The team's official Twitter account stepped in to help provide context to the images.

And in a spectacular example of "humble-bragging," the Patriots account suggested that for many players, visiting the White House to celebrate a Super Bowl championship has become more than a chore than anything else. (Dont'a Hightower cited this as well.) The Patriots have won two Super Bowls in a three year period twice, and the team noted that the last time this feat occurred a similar number of players (36 vs 34) went to the White House.

And, for what it's worth, here's the picture of the full organization today at the White House. The organization says the two groups are comparable in size.

This is why people are having trouble trusting the media. It would have taken a 30-second Google search to count the number of players who visited the White House in 2015 compared to 2017, or one could simply use their ocular nerves to realize that hey, everyone pictured in that first picture isn't actually a member of the New England Patriots. Of course, the old adage that a lie can get halfway around the world before the truth can get its pants on holds true once again--the corrected tweet has fewer than 500 retweets.

UPDATE: Patriots say # of players was smaller this year than 2015 (34 vs. 50) but total delegation was roughly the same. pic.twitter.com/Ij77Def8z5