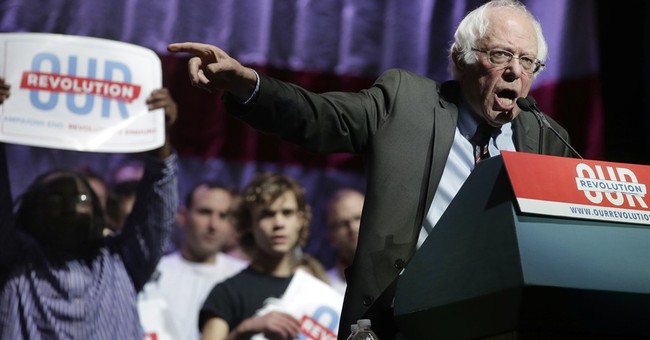 The Democrats have been on the struggle bus as of late. Setting aside Hillary Clinton's shocking defeat in the presidential election and the continued failure to be relevant on the local or state level, they've also seen their protests against Trump's nominees fall flat as their own rule changes have backfired against them, plus a contentious leadership election that alienated many members of the party when the Clinton-backed candidate won.

So what's a party to do? Bring in Sen. Bernie Sanders (I-VT), obviously. In an effort to rile up the youngins', the DNC is sending Sanders and Chairman Tom Perez on the road to red states and "purple" states over the next few weeks.

With the exception of Nevada and part of Maine, each state on the "Come Together and Fight Back" tour voted for Donald Trump in November.

The states that will be visited include Arizona, Florida, Kentucky, Maine, Montana, Nebraska, Nevada and Utah. Of these states, Nevada was the only state to go blue in the 2016 presidential election. Maine had a split electoral vote, with three of its votes going to Hillary Clinton and one going to Donald Trump.

The "Come Together and Fight Back" tour begins April 17.

"At a time of massive income and wealth inequality and a shrinking middle class, we need a government which represents all Americans, not just Wall Street, multi-national corporations and the top 1 percent," Perez and Sanders said in a statement." Regardless of where they live or their political affiliations, most people understand that it is absurd for Republicans in Congress to support huge tax breaks for billionaires while pushing for cuts to Social Security, Medicare and Medicaid."