Irony: The U.N.'s Theme For International Women's Day Is About Putting More Women In The Workforce 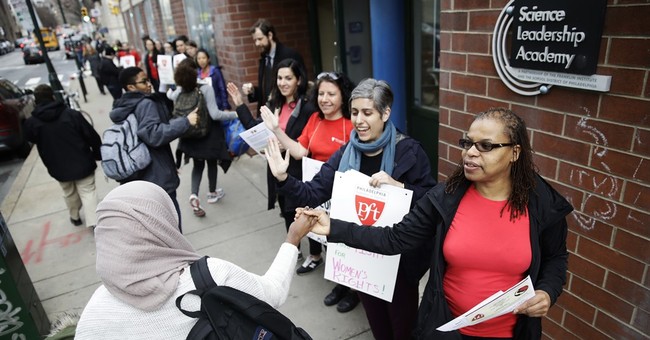 Today is International Women's Day, an annual holiday honoring the achievements of women. Since 1996, the United Nations has given each year a theme, past themes have included "Women and HIV/AIDS," "Women and Men United to End Violence Against Women and Girls," and "Empower Rural Women, End Poverty and Hunger."

The world of work is changing, with significant implications for women. On one hand, technological advances and globalization bring unprecedented opportunities for those who can access them. On the other hand, there is growing informality of labour, income inequality and humanitarian crises. See the flyer and RSVP for the official UN commemoration of the International Women's Day»

Against this backdrop, only 50 per cent of working age women are represented in the labour force globally, compared to 76 per cent of men. What’s more, an overwhelming majority of women are in the informal economy, subsidizing care and domestic work, and concentrated in lower-paid, lower-skill occupations with little or no social protection. Achieving gender equality in the world of work is imperative for sustainable development./p>

The United Nations observance on 8 March will call upon all actors to Step It Up for Gender Equality towards a Planet 50-50 by 2030 by ensuring that the world of work works for all women.

This is kind of ironic, given that in the United States, lots of women are making the conscious choice to not partake in work today due to the "A Day Without A Woman" strike. At least three school districts have canceled class due to excessive teacher call-outs.

So much for equality in the workforce.