Watch Chance the Rapper Dedicate His Grammy To God 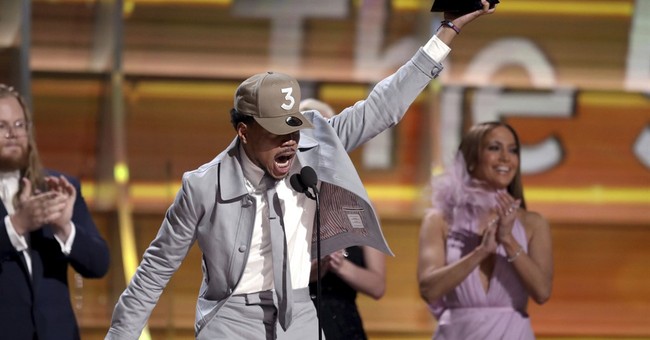 Chance the Rapper had quite the Sunday night. He won three Grammys--for Best New Artist, Best Rap Album for his album "Coloring Book," and Best Rap Performance for his song "No Problem." And in a refreshing change of pace during a night full of various political screeds, all he wanted to do was praise the Lord. During his acceptance speech for Best New Artist, Chance the Rapper spoke openly about his faith and his thankfulness for God's blessings.

"Glory be to God...I claim this victory in the name of the Lord," began Chance the Rapper, before thanking God for giving him his family.

As an independent musician who released his album on streaming services, he had a rather unusual path to the Grammys. Clearly, he's very grateful to all that came together to make this win happen.

It's nice to see a celebrity proclaim his faith on the most public of all stages, and it was nice to hear the applause from his peers in the industry.

During the Grammy Awards, Chance the Rapper also put on a gospel-themed performance of his songs "How Great" and "All We Got."