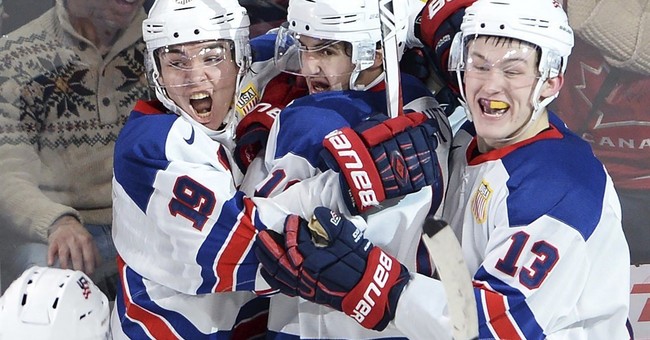 Yesterday in Montreal, in a thrilling shootout* victory over Team Canada, the United States capped off an undefeated IIHF World Junior Championship and won the gold medal. With the win, the U.S. became the first team to ever beat Canada twice in a single World Juniors tournament, having also beaten them during pool play.

To say the game was "epic" would somehow be an understatement. Fresh off of another shootout** victory over off- and on-ice foe Russia, Team USA faced off on Thursday evening against Canada in a packed Bell Centre. In a sold-out crowd that was overwhelmingly rooting for the home team, the U.S. ended the first period down 2-0. The U.S. came back to tie the game in the second period, and then Team Canada scored two quick goals to seemingly put the game away at 4-2.

But Team USA wasn't done yet. Less than a minute after Canada's fourth goal, the U.S. scored to cut the lead to one, and scored again five minutes later to knot the game up at four. After a 20-minute overtime period, the game went into a shootout.

The hero of Wednesday's shootout was the University of Denver's Troy Terry, who scored three times against Russia to send Team USA to the tournament final. Terry was back to his magical ways once again, and scored the only goal by either team in the five-round shootout to clinch victory for the Americans:

Troy Terry going 4/4 in the shootout at the World Junior Championships to win the Gold Medal for Team USA ??????! #WJC2017 pic.twitter.com/liqgM7hKAr

After the medals and handshakes were distributed, the flags were raised and The Star-Spangled Banner began to play...and that's when we all learned that Team USA should really just stick to hockey.

Take note, Colin Kaepernick: This is how you're supposed to react to the National Anthem. (Off-key or not.)

Congrats on the win, Team USA!

*I know. Shootouts are dumb in elimination games. However, it's the rules, so...