Green Party Tweets, Deletes Claim That Rain Delay In Cleveland Was Because of Global Warming 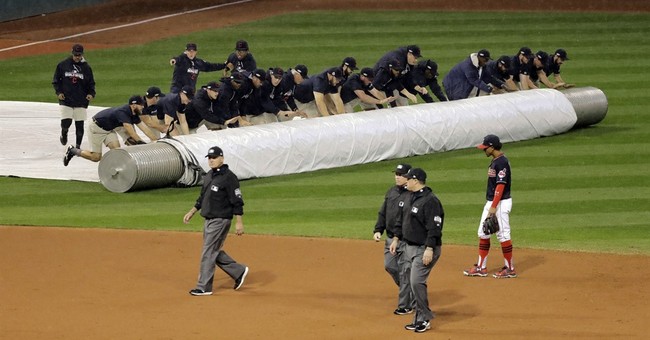 Last night, in the game seven of the World Series, there was a brief rain delay prior to the start of extra innings. While the Cubs would go on to defeat the Indians by a score of 8-7, one of the bigger losers of the night was the Green Party, who tweeted--and deleted--a claim that the "rain delay" should have been a snow delay.

You'd think for a party so concerned with the environment, they would do a quick Google search to see if a weather pattern was truly out of the ordinary, but I guess not.

Green Party deleted that stupid tweet. Maybe because average low for today in Cleveland is 41 degrees. Kinda hard to snow at that temp.

If the game gets rained out. Green Party hits 5 % #WorldSeries

If the Green Party wants to be taken seriously, and I assume it does, it probably should stop doing tweets like that one.