Witnesses To Priest Murdered By ISIS Detail His Last Moments 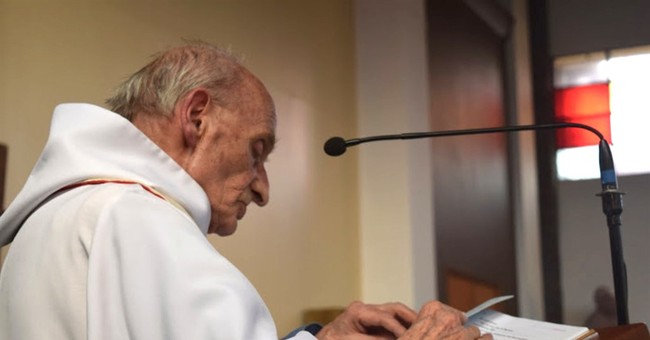 In July, Fr. Jacques Hamel was murdered while celebrating Mass at his parish in Normandy, France. Pope Francis recently announced that the Vatican was going to open formal investigation as to whether his death constitutes an act of martyrdom in order to canonize him as a saint in the Roman Catholic Church.

Normally, there is a five-year waiting period before the sainthood process can begin, but Pope Francis waived this waiting period as the majority of the witnesses to Fr. Hamel's death are elderly and may pass away before five years are up. Now, those witnesses have begun sharing the story of Fr. Hamel's last moments on earth.

Sr. Danielle, one of the nuns attending Mass that day, confirmed that Fr. Hamel's last words were "Be gone, Satan!", which he yelled out twice before his throat was slit.

Guy Coponet says, “I prayed as I have never prayed in my life. I called upon all the saints I could think of. First of all, little Brother Charles [de Foucauld], also killed by a Muslim, in the desert. In my heart of hearts, I recited my favorite prayer: ‘Father, I abandon myself into your hands; do with me what you will… Into your hands I commend my soul.’ I was in his hands. Especially after Mass!”

The journalists asked about reports that before his death Fr. Hamel called out twice, “Be gone Satan!” and whether the trio saw evil in action. “No doubt,” said Sr. Danielle, “This does not mean that [the assailant] Adel Kermiche was possessed, but that Satan was at work in a powerful way. Father Jacques wanted to exorcise this evil. Those were his last words. Satan does not like the Eucharist …”

One of the murderers, Adel Kermiche, mocked one of the nuns participating in the Mass for her belief in Jesus.

After stabbing Guy Coponet and dragging him to the altar steps, Kermiche commenced a conversation with Sr. Helen, one of the members of Sr. Danielle’s community. As Sr. Danielle relates, Kermiche asked, “Are you afraid of dying?” When the nun said “no” he seemed surprised and asked her why not.

“Because I believe in God, and I know I will be happy.”

The killer said, in a low voice, “I believe in God too, and I am not afraid of death.” Then he declared: “Jesus is a man, not God!”

The two assailants were shot dead by police following the attack.

Despite witnessing such unimaginable horror, the witnesses to Fr. Hamel's death say that their faith remains strong, and that by the grace of God they will be able to one day forgive the attackers.