The NCAA Ruled This Army Veteran Ineligible For The Dumbest Reason 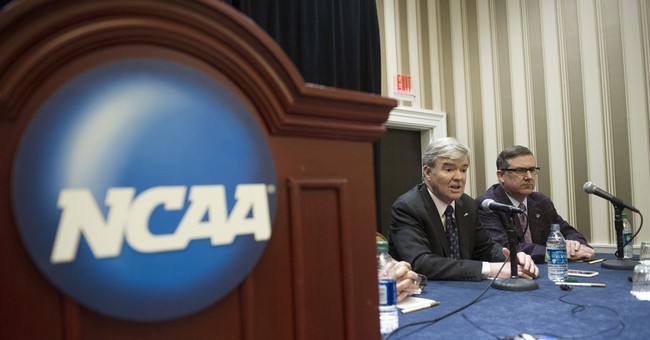 Isaiah Brock, a 22-year-old freshman basketball player at Oakland University in Michigan, had an unusual route to college.

After graduating from a failing high school in Baltimore in 2011, Brock joined the Army in 2012 and was deployed to Afghanistan and Kuwait. While in the military, it was Brock's job to extract fallen soldiers from the battlefield, catalogue their injuries, and prepare them to return to the United States. By chance, he was spotted by Oakland University's coach at the Hardwood Classic, a basketball tournament for soldiers, and offered a spot on the university's team. To prepare for the rigors of college, Brock took online courses before he was discharged from the Army and took two courses on campus--getting an A and a B. By all accounts he was a serious student, well-liked by his teammates, and has worked as a tutor for other athletes.

So naturally, the NCAA has ruled he can't play this year...because of his high school grades. From five years ago. Because Brock didn't have the best work ethic prior to his military service (and success in taking college classes), he's unable to play this season. The NCAA does not believe that he is academically prepared for college.

From the Detroit Free Press:

Brock already is involved in the campus community, tutoring other students. He has a goal of becoming a counselor.

And at this point, he’d only be a minor contributor to the Golden Grizzlies on the floor. At 6-feet-8 and 191 pounds, he can leap and rebound a bit. But he’s still learning what to do in the post. He runs the floor smoothly but doesn’t have college-level court awareness nor comfort.

That’s what Kampe doesn’t understand about the NCAA's verdict. This is an unusual circumstance, not about pushing a star player to be eligible. It’s about giving back to someone who served the country.

“My question to them is why? You’re able to make a decision like this because of him? This guy came eye to eye with the Taliban, and you’re going to tell him he can’t play basketball? Because, four years ago, he didn’t care about school?” Kampe said. “He’s gotten three B's and an A in college work. So why are you doing this? Who are you hurting if you let him play? What’s the purpose for this? And they can’t give us an answer.”

Oakland University has filed an appeal and hopes to have the matter sorted before the basketball season begins in early November.

The NCAA is being ridiculous. Nobody is the same person at the age of 22 as they were at age 18. Clearly, Brock has gone through more than what most college students will ever go through, and the military has helped to shape him as a person. He's proven that he is capable of handling college-level work, and he's matured and grown up since his high school days. His presence on the team would serve as an excellent role model to his teammates, and he could inspire other young people in the area to work hard to achieve dreams--but the NCAA doesn't think this is okay. For an organization that seeks to look out for student athletes, they sure don't seem concerned about this one.