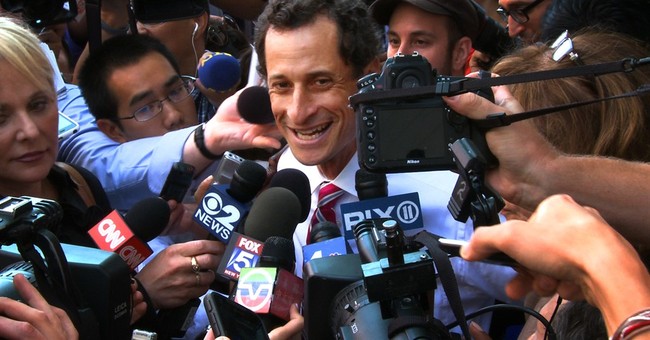 After his latest round of Anthony Weiner's sexting pictures were published, most people were stunned that one of the images included a shot of his toddler-aged son lying next to him in bed. Now, New York's Administration for Children’s Services is launching an investigation into Weiner and his treatment of his son.

Child welfare officials are investigating Anthony Weiner in the wake of The Post’s exclusive report that he sent a lewd selfie that showed his young son lying in bed next to him, sources said Wednesday.

The Administration for Children’s Services has launched a probe into the disgraced ex-pol’s care of the boy, a city government source said.

Agency protocol requires a home visit within 48 hours, and ACS showed up at Weiner and estranged wife Huma Abedin’s Union Square apartment building on Tuesday, a worker there confirmed.

Weiner has publicly spoken about his new life post-Congress as a stay-at-home dad. His (now-separated) wife, Huma Abedin, is Hillary Clinton's top aide, and has understandably been quite busy with the election well underway.

In 2011, the world was made aware of Weiner's sexting habits when he accidentally tweeted a risque picture. Another scandal emerged during his failed 2013 NYC mayoral campaign.