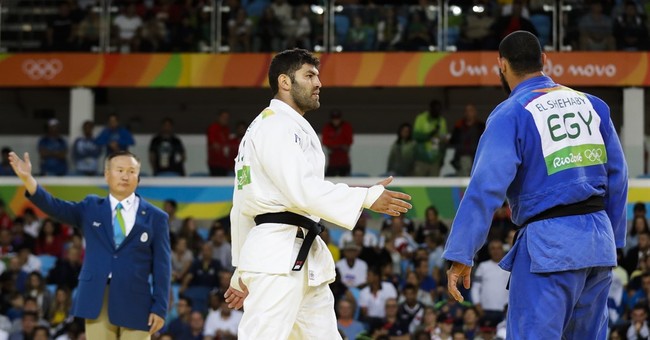 So much for the spirit of the games: after Egyptian judoka Islam el-Shehaby lost to Israeli Or Sasson, he refused to shake hands after the match. Eventually, following loud boos from the crowd, el-Shehaby gave Sasson a small bow. In judo, competitors typically shake hands or bow following matches.

Judo officials are looking in to whether el-Shehaby's actions merit some sort of punishment. It was noted that the fact that el-Shehaby even agreed to fight Sasson could be considered progress. El-Shehaby had faced threats for agreeing to compete against an Israeli.

"In the past, it is not sure that a fight between those two athletes would have taken place. This is already a big improvement that Arabic countries accept to be opposed to Israel," he said.

"There is no obligation for shaking hands at the end of the fight, but it is compulsory to bow, that's why the Egyptian was called back to bow and he did.

"Nevertheless, his attitude will be reviewed after the Games to see if any further action should be taken."

As my friend Bre Payton over at The Federalist has written, this is hardly the only case of anti-Israel behavior during these Olympics.