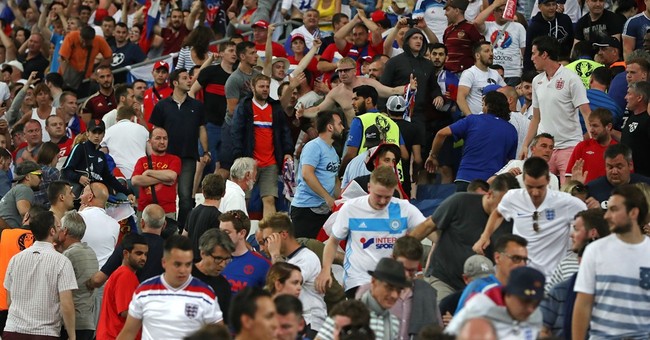 Following a fan brawl before and after the England vs. Russia match of the Euro 2016 tournament that left 35 people injured, UEFA has threatened to expel both nations from the tournament if their fans misbehave once again.

Both nations' fans behaved badly throughout the day, with England fans fighting Russian fans before the game, and with Russian fans attacking England supporters as the game was ending. The match ended in a 1-1 draw.

England fans were involved in fights with Russian supporters in the city befoer the Group B match, while, after the game Russia fans attacked the English in the ground for which they have been separately charged by Uefa. Martin Glenn, the FA's chief executive, last night asked the English supporters to be on their best behavior. "Violent scenes like those witnessed over the weekend in Marseille have no place in football, nor society as a whole," said Glenn."

Security in the stadium was reportedly quite lax, leading to the Russian fans attacking England supporters as the game ended. Normally, there are barriers to divide the fans of different teams.

Alcohol will be restricted in "certain high-risk areas" of France throughout the tournament.

The Euro 2016 tournament, which is essentially a Europe-only version of the World Cup, kicked off of June 10 and continues for the next month. France is the host nation.