The Citadel: No Exceptions for Hijabs 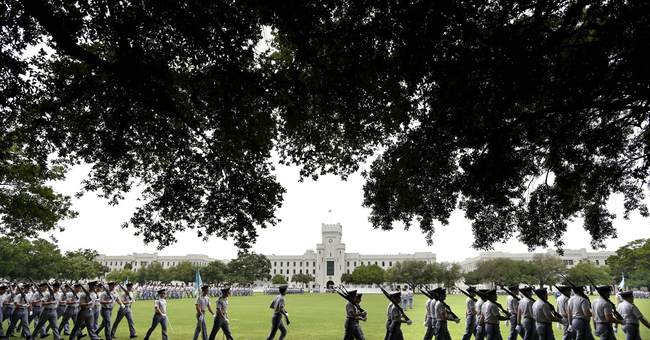 Back in April, Justin wrote about a prospective student's request to The Citadel (a public military college in South Carolina) to permit her to wear a hijab as part of her uniform. (Students at The Citadel, called "cadets," wear uniforms at all times.) On Tuesday, the college announced their decision: no uniform exceptions. If the student were to enroll, she would have to wear the same uniform as everyone else.

An American Muslim student admitted to the Class of 2020 requested a religious accommodation to wear a head cover, called a hijab, with the standard uniform of the South Carolina Corps of Cadets. While we hope the student will enroll in the college this fall, the Commandant of Cadets, after considerable review, determined the uniform exception cannot be granted. Captain (Retired) Geno Paluso’s decision was made with my support and the support of The Citadel Board of Visitors.

As the Military College of South Carolina, The Citadel has relied upon a highly effective educational model requiring all cadets to adopt a common uniform. Uniformity is the cornerstone of this four-year leader development model. The standardization of cadets in apparel, overall appearance, actions and privileges is essential to the learning goals and objectives of the college. This process reflects an initial relinquishing of self during which cadets learn the value of teamwork to function as a single unit. Upon graduation, The Citadel’s graduates are prepared to enter a life committed to principled leadership in military service and civilian careers.

The statement also elaborated that the school accommodates for religious-based dietary requirements, as well as sets aside time for prayer if a cadet requests it. The uniform, however, is not something that the school views as negotiable.

The girl in question has not been identified. This was reportedly the first request for a religious exemption to the uniform in the college's history.