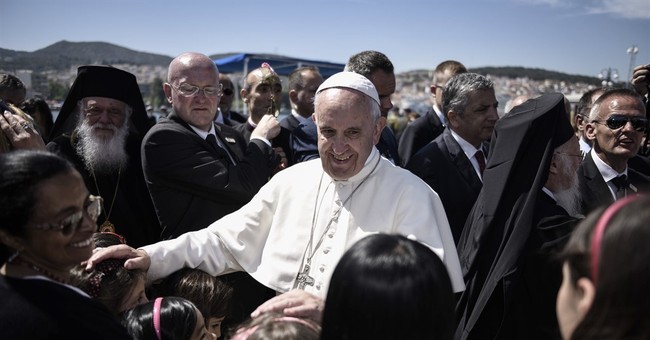 Pope Francis has brought 12 Syrian migrants, including six children, back to Rome from the Greek island of Lesbos. The pontiff visited the island along with Patriarch Bartholomew to assess the refugee situation.

In a statement released from the Vatican, the director of the Holy See's press office explained that the three families came from Syria and that their houses had all been bombed. They were already residing in the refugee camps in Lesbos before being selected to move to Rome. The Vatican will be responsible for ensuring that the families are taken care of.

Statement of the Director of the Holy See Press Office

The Pope has desired to make a gesture of welcome regarding refugees, accompanying on his plane to Rome three families of refugees from Syria, 12 people in all, including six children. These are all people who were already in camps in Lesbos before the agreement between the European Union and Turkey.

The Pope’s initiative was brought to fruition through negotiations carried out by the Secretariat of State with the competent Greek and Italian authorities.

All the members of the three families are Muslims. Two families come from Damascus, and one from Deir Azzor (in the area occupied by Daesh). Their homes had been bombed.

The Vatican will take responsibility for bringing in and maintaining the three families. The initial hospitality will be taken care of by the Community of Sant’Egidio.

Catholic online magazine Aleteia interviewed one of the 12 refugees, who explained that he's hopeful his children will be able to go to school and have a better future. He also hopes that peace will one day return to Syria.