Ben Carson Adviser: Yeah, We're Not Going To Drop Out Even if He Wins Zero Delegates 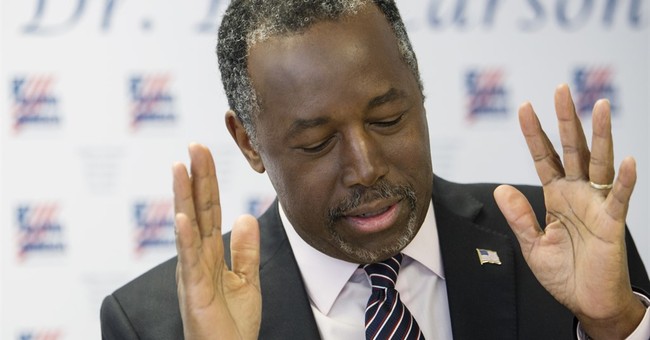 Dr. Ben Carson is sticking around even if he doesn't win a single delegate on Super Tuesday. Carson is currently polling in last place or second-to-last-place in the vast majority of states that have primaries and caucuses on Super Tuesday.

On Tuesday, Williams told The Hill that Carson has firmly declared to him that he will not get out of the race until a candidate reaches the 1,237 delegates needed to win the nomination.

“Until then it’s open season, and the race is wide open,” Williams said.

“Dr. Ben Carson is not and never will be a part of the political class. He doesn’t think like a politician, doesn’t act like a politician and doesn’t rely on those relationships like the other politicians do. He’s staying in the race even if he doesn’t get any delegates tonight.”

Carson, asked on Tuesday's "Morning Joe" whether he would re-evaluate his campaign after Super Tuesday, said, “I re-evaluate the campaign every single day. But one of the major factors for me is our supporters. That’s the reason I’m in here … I’m in here because people asked me to be here. I will continue to listen to what they have to say.”

Earlier on Tuesday, the Carson campaign admitted that they have no path to winning the GOP nomination.

If a candidate admittedly has no viable path to winning the nomination, he owes it to his supporters and donors to exit the race. It does not make sense that Carson is still in this race, and that he plans on staying in for the long haul.