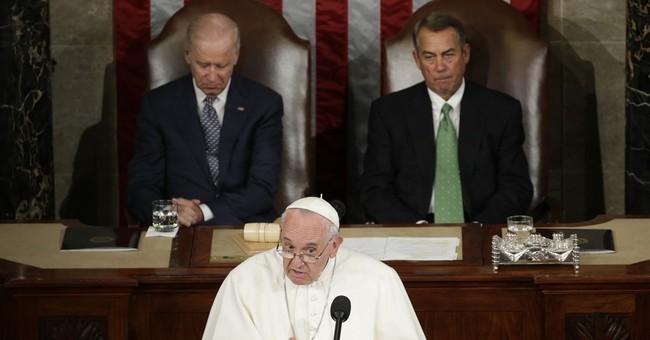 Pope Francis addressed a joint meeting of Congress on Thursday morning, becoming the first pope to do so. In his speech, which lasted about 50 minutes, the pontiff touched on a variety of issues, from the death penalty to poverty, protecting the family, immigration, and liberty.

Some highlights and notable lines:

The yardstick we use for others will be the yardstick which time will use for us. The Golden Rule also reminds us of our responsibility to protect and defend human life at every stage of its development.

On the death penalty:

[...] to advocate at different levels for the global abolition of the death penalty. I am convinced that this way is the best, since every life is sacred, every human person is endowed with an inalienable dignity, and society can only benefit from the rehabilitation of those convicted of crimes.

Nonetheless, when the stranger in our midst appeals to us, we must not repeat the sins and the errors of the past. We must resolve now to live as nobly and as justly as possible, as we educate new generations not to turn their back on our “neighbors” and everything around us.

On economics and poverty:

The fight against poverty and hunger must be fought constantly and on many fronts, especially in its causes. I know that many Americans today, as in the past, are working to deal with this problem.

It goes without saying that part of this great effort is the creation and distribution of wealth. The right use of natural resources, the proper application of technology and the harnessing of the spirit of enterprise are essential elements of an economy which seeks to be modern, inclusive and sustainable.

In Laudato Si’, I call for a courageous and responsible effort to “redirect our steps” (ibid., 61), and to avert the most serious effects of the environmental deterioration caused by human activity. I am convinced that we can make a difference and I have no doubt that the United States – and this Congress – have an important role to play. Now is the time for courageous actions and strategies, aimed at implementing a “culture of care” (ibid., 231) and “an integrated approach to combating poverty, restoring dignity to the excluded, and at the same time protecting nature” (ibid., 139).

In this regard, I am confident that America’s outstanding academic and research institutions can make a vital contribution in the years ahead.

On war and violence:

Being at the service of dialogue and peace also means being truly determined to minimize and, in the long term, to end the many armed conflicts throughout our world. Here we have to ask ourselves: Why are deadly weapons being sold to those who plan to inflict untold suffering on individuals and society? Sadly, the answer, as we all know, is simply for money: money that is drenched in blood, often innocent blood. In the face of this shameful and culpable silence, it is our duty to confront the problem and to stop the arms trade.

Fundamental relationships are being called into question, as is the very basis of marriage and the family. I can only reiterate the importance and, above all, the richness and the beauty of family life.

t the risk of oversimplifying, we might say that we live in a culture which pressures young people not to start a family, because they lack possibilities for the future. Yet this same culture presents others with so many options that they too are dissuaded from starting a family.