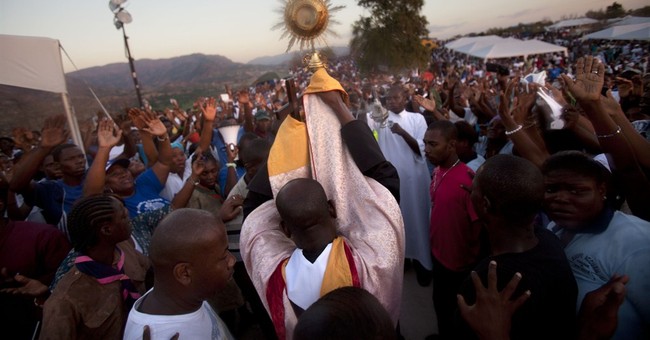 An archbishop in Oklahoma City, the site of a planned satanic "black mass" next month, has dropped his lawsuit against a satanic group after the group's leader returned the pilfered consecrated Host he had planned to desecrate during the service.

An attorney representing the head of the satanic group presented the Host to a Catholic priest Thursday afternoon. The lawsuit sought return of the Host following multiple public statements by the head of the local satanic group that they planned to defile and desecrate the consecrated Host during a satanic ‘black mass’ scheduled next month in Oklahoma City.

With the return of the Host and an accompanying signed statement from the satanic group leader that the group no longer possesses a consecrated Host, nor will they use a consecrated Host in their rituals, the archbishop agreed to dismiss the lawsuit with prejudice.

Catholics believe in transubstantiation, or the belief that consecrated Hosts become the physical body and blood of Jesus Christ. The act of desecrating a consecrated host is akin to desecrating the body of Jesus. Archbishop Paul S. Coakley of Oklahoma City filed the lawsuit saying that the consecrated Host is considered to be property of the Roman Catholic Church and that the satanic group was unlawfully in possession.

While Archbishop Coakley is glad that the group no longer plans to desecrate the Eucharist, he is still urging the city to cancel the event as it is greatly offensive to the quarter of a million Catholics who reside in Oklahoma.

“In spite of repeated requests, there has been no indication that the City intends to prevent this event from taking place,” Archbishop Coakley wrote in a letter to the people of the archdiocese, dated Aug. 4, the Memorial of St. John Vianney. I have raised my concerns with city officials and pointed out how deeply offensive this proposed sacrilegious act is to Christians and especially to the more than 250,000 Catholics who live in Oklahoma.”

There are a series of vigils planned to protest the "black mass" ceremony.