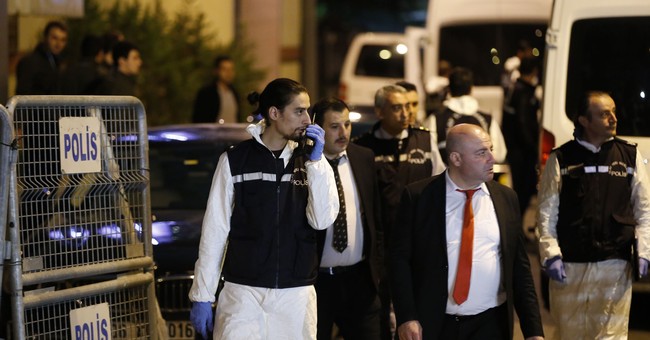 Although they still had no direct evidence that Khashoggi had even been killed at that point, let alone any information about why the Saudi government would murder him, Stelter felt the urge to suggest that Trump, along with “other world leaders,” might be responsible for motivating Khashoggi’s murder and dismemberment [emphasis mine]:

HIATT: I think, even for people who wanted to give MBS [Saudi Prince Mohammad bin Salman] the benefit of the doubt, this has to be a watershed moment. This is, if the reports are true, a crime of an entirely different caliber, and it should not be possible for anybody to go back to business as usual.

STELTER: To lure someone to a consulate, to dismember a body and take it back to Saudi -- it is a crime of a different caliber. I wonder if you look at what’s happened in the last twelve days and you wonder if “enemy of the people” rhetoric — not just from President Trump, but also then from other world leaders — has anything to do with this, anything at all?

Although he seemed a bit hesitant to fully agree with Stelter’s premise at first, Hiatt did ultimately concur that Trump’s “enemy of the people”-type statements about American journalists were “part of the big picture” surrounding Khashoggi’s presumed murder. After stressing that his killers should be the “focus” of any condemnation or investigation, Hiatt also argued that Trump’s lack of liberal international moralizing about “democratic values” had opened up the possibility of murdering journalists [emphasis mine]:

I think there is a larger picture, which it’s also fair to look at, which is that, uh, dictators around the world feel emboldened. When you have Putin reaching out to Britain to poison his enemies, when you have China reaching out to Hong Kong and elsewhere to kidnap people they perceive to be their enemies, and when in each case these supposed enemies are peaceful, uh, you know, people who have done absolutely nothing wrong, uh, you have to ask why is this happening, and I do think it’s happening in part because the United States is retreating from its traditional role as a leader in the world standing up for democratic values and -- including freedom of expression.

Um, so that is all true, and Brian, you’re right. That’s part of the big picture. But I also think it’s crucial to say: “Where is Jamal?” That is a single crime. It has criminals who are responsible, and let's focus on finding them and holding them accountable.

At this point, Stelter thanked Hiatt for coming on the program and ended the segment.

Based on CNN’s video of the segment, it does not appear that either Stelter or Hiatt bothered to bring up or speculate about far more plausible hypotheses for Khashoggi’s death or disappearance that involve his connections to Saudi intelligence, his shady arms-dealing uncle Adnan Khashoggi, or his alleged sympathy for the Muslim Brotherhood (not to mention Khashoggi’s past acquaintance with Osama bin Laden).

Moreover, it is important to note that in spite of Stelter’s pretensions as a champion for the free press who abhors Trump’s purportedly authoritarian and anti-media rhetoric, Stelter has proved to be less than principled in his defense of non-mainstream news voices.

As one obvious example, at the beginning of this Sunday’s very same broadcast of “Reliable Sources,” Stelter praised Facebook’s recent purge of more than 800 popular political pages and accounts — some of which had hundreds of thousands or even millions of followers — and described the move as a necessary measure to clean up “pollution” on the social networking powerhouse.