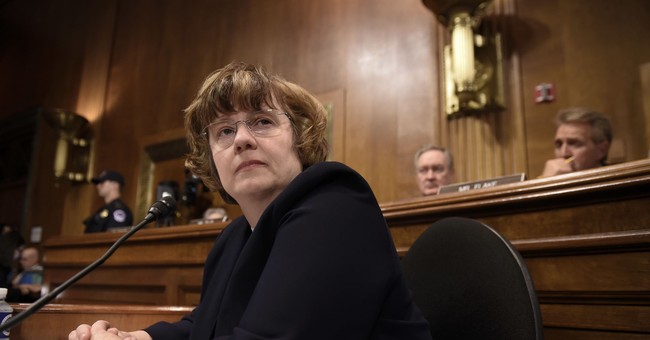 As the mainstream media continues to devote immense portions of its coverage to the allegations of sexual assault and gang rape against Brett Kavanaugh, many outlets have found little to no time to discuss sex crimes prosecutor Rachel Mitchell’s recent memo detailing a litany of problems with Christine Blasey Ford’s claims.

The memo —released to Senate Republicans on Sunday —follows from Mitchell’s questioning of Ford at last Thursday’s Senate Judiciary Committee hearing and lists several key points about Ford’s consistent memory problems, her shifting descriptions of the alleged sexual assault, and the lack of corroborating evidence to back up her claims. Based on the facts at her disposal, Mitchell concluded that [emphasis in bold mine]:

“In the legal context, here is my bottom line:A “he said, she said” case is incredibly difficult to prove. But this case is even weaker than that.Dr. Ford identified other witnesses to the event, and those witnesses either refuted her allegations or failed to corroborate them. For the reasons discussed below, I do not think that a reasonable prosecutor would bring this case based on the evidence before the Committee. Nor do I believe that this evidence is sufficient to satisfy the preponderance-of-the-evidence standard.”

In other words, from her non-partisan perspective as a lawyer, Mitchell believes that Ford’s accusation of sexual assault against Kavanaugh is so weak that it would not hold up even under the most favorable legal conditions (only requiring Ford to show that her claim is more likely to be true than false).

And yet, despite the significance of Mitchell’s analysis and its import for the continuing battle over the Supreme Court, most of the major broadcast news networks have chosen to either ignore or seriously downplay her memo.

In fact, according to a study by the Media Research Center, although ABC, NBC, and CBS devoted a total of 65 minutes of their morning and evening newscasts to reviewing the Kavanaugh allegations on Monday, only two minutes of their coverage went to Mitchell’s memo. While ABC’s “Good Morning America” spent 28 seconds on the findings and CBS’s “This Morning” allotted 89 seconds to the memo, NBC completely ignored it.

Revealingly, none of the “Big Three” networks used their vaunted evening shows to mention the memo’s findings.

Furthermore, according to an analysis by Grabien News, ABC, NBC, CBS, and other broadcast networks not only devoted minimal coverage to the memo on Monday, but the reporting on it that did exist from them was incredibly shoddy quality-wise [emphasis mine]:

On ABC's "Good Morning America," the report received two sentences of coverage, tacked onto the end of a longer report about the allegations against Kavanaugh. These sentences only mentioned Mitchell's conclusion, not her specific findings.

On "CBS This Morning," it was reported that Saturday Night Live made fun of Mitchell, but the prosecutor's findings went unreported…

On MSNBC, the report's findings have received zero coverage, even as the report itself received four mentions. The report received a brief mention in the 5 AM hour, but its finds went unreported. In the 9 AM hour, Mitchell's report was brought up, but only so its conclusion could be knocked down by Basil Smikle, a Democratic strategist. In the 10 AM hour, Mitchell being made fun of on Saturday Night Live received coverage, but her findings went unreported. On "Morning Joe," the report was mentioned only as a jumping off point for attacking Mitchell(undertaken by former U.S. Attorney Barbara McQuade).

On CNN, the reported [sic] received a cursory mention in the 2 and 3 AM hour, although merely as a pretext for a guest to argue against its conclusion. In the 4 AM hour, the report received one sentence of coverage, but its actual findings went unreported. In the 9 AM hour, the network's Supreme Court reporter, Ariane de Vogue, reported: "[Mitchell] said no reasonable prosecutor would bring charges. And she actually issued a bottom line: She said, 'A he said/she said case is incredibly difficult to prove, but this case is even weaker than that. Dr. Ford identified other witnesses to the event, and those witnesses either refuted her allegations or failed to corroborate them.'"

De Vogue then immediately followed this up with a much more emphatic rebuttal: "But it’s worth noting that the Democrats and supporters of Ford, they totally dismiss this report. They say that she didn’t even interview Kavanaugh. She was hired. This is just one side of the story…”Finally, in the 2 PM hour, a CNN guest mentioned the report, but did not discuss its findings, nor did anchor Brooke Baldwin. At no point did CNN actually report the contents of Mitchell's findings.

Let’s just take a brief look at all the findings that ABC, CBS, NBC, CNN, and MSNBC don’t think are important for you to know [taken from Mitchell’s memo, emphasis mine]:

“Dr. Ford has not offered a consistent account of whenthe alleged assault happened…”

“Dr. Ford has struggled to identify Judge Kavanaugh as the assailantby name.”

“When speaking with her husband, Dr. Ford changed her description of the incident to become less specific.”

“Dr. Ford has no memory of key details of the night in question—details that could help corroborate her account.”

“Dr. Ford’s account of the alleged assault has not been corroborated by anyoneshe identified as having attended—including her lifelong friend.”

“Dr. Ford has not offered a consistent account of the alleged assault.”

“Dr. Ford has struggled to recall important recent events relating to her allegations, and her testimony regarding recent events raises further questions about her memory.”

“Dr. Ford’s description of the psychological impact of the event raises questions.

“She maintains that she suffers from anxiety, claustrophobia, and post-traumatic stress disorder (PTSD).

“The date of the hearing was delayed because the Committee was informed that her symptoms prevent her from flying. But she agreed during her testimony that she flies “fairly frequently for [her] hobbies and ... work.” She flies to the mid-Atlantic at least once a year to visit her family. She has flown to Hawaii, French Polynesia, and Costa Rica. She also flew to Washington, D.C. for the hearing.”

In a sane media environment, Mitchell’s findings —exhaustively backed up as they are by incontestable documentary and testimonial evidence —would be a major story. Her long list of the crucial defects in Ford’s case should be a wake-up call for those still convinced by it and a serious source of study for anyone interested in ferreting out the facts about the California professor’s allegations.

Instead, America’s most respectable news networks are more interested in yucking it up about the latest episode of SNL or furiously scraping together the latest flimsily-sourced anti-Kavanaugh allegations than they are in real news. If that’s what we continue to see as time goes on, it might be time to change the channel for good.