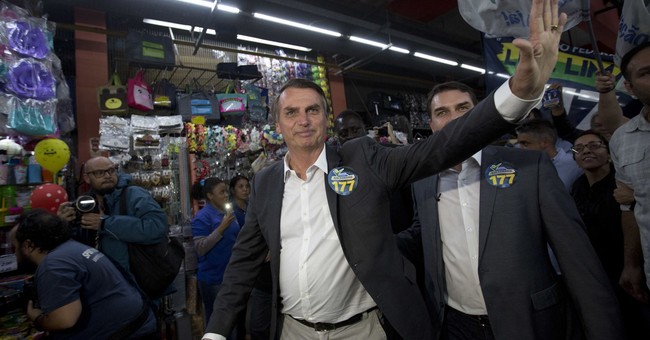 Jair Bolsonaro, one of Brazil’s leading candidates in this year’s presidential race, was nearly stabbed to death on Thursday at a public rally in the province of Minas Gerais. Frequently called the “Brazilian Trump” for his controversy-stirring remarks and right-wing populist agenda, Bolsonaro’s attempted assassination has drawn widespread condemnation from his political friends and enemies alike and has galvanized supporters across the country.

According to Bolsonaro and his son Flavio’s official Twitter accounts, the presidential candidate is recovering from the attack and his condition is stable despite suffering serious wounds to his intestines. On Thursday night, Flavio posted a picture on Twitter of his father holding a thumbs up from his hospital bed:

“Jair Bolsonaro is stronger than ever and ready to be elected President of Brazil in the 1st ROUND! God has just given us another sign that good will overcome evil! Thank you to all who gave us strength at this very difficult time! Brazil above all, God above all!”

According to Bloomberg and the BBC, Bolsonaro was transferred to a hospital in Sao Paulo on Friday to continue his recovery. Jair’s son Eduardo told Bloomberg that his father would “probably have died” if he had not received such prompt medical care, but that it would still be at least two weeks before the candidate could go back out on the campaign trail.

Bolsonaro’s attacker —later identified as 40 year-old Adelio Bispo de Oliveira —he was immediately caught and apprehended at the scene by members of the crowd surrounding the candidate and then transferred to police custody. According to Reuters, although Oliveira had past connections to the Socialism and Liberty Party from 2007 to 2014, a local police spokesman told reporters that investigators had not yet established a clear political motive for the attempted murder.

Instead, police appear to believe that Oliveira’s crime was caused by mental illness. To back up this assertion, they publicly released a video in which Oliveira claimed that he attacked Bolsonaro on direct orders from God. Unsurprisingly, police described the suspect’s overall mental state as being seriously disturbed.

Bolsonaro was already expected to place second in the first round of elections in early October, which would allow him to face another candidate one-on-one in a second and final round later that same month. However, due to the attempted murder and Bolsonaro’s heavy campaign focus on implementing harsher law-and-order methods to combat crime, the attack is likely not just to boost his sympathy among voters, but also to validate his political concerns and seriously fire up his voting base.

Just last week, Bolsonaro stirred up international controversy by advocating for allowing police to kill criminals without due process. Per the Associated Press:

A leading candidate in Brazil's presidential election said police should be given license to kill criminals and those who do should be given medals not face prosecution.

Right-wing candidate Jair Bolsonaro said in an interview Tuesday night that he would "leave good people out of range of the shooting" and go at criminals full steam.

"This kind of people (criminals), you cannot treat them as if they were normal human beings, ok? We can't let policemen keep dying at the hands of those guys," Bolsonaro said on TV Globo's main nightly news program. ""If he kills 10, 15 or 20 with 10 or 30 bullets each, he needs to get a medal and not be prosecuted."

According to the BBC, Bolsonaro has also courted controversy by comparing homosexuality to pedophilia and once “saying that a congresswoman was too ugly to be raped.” Nevertheless, Bolsonaro’s strong stances in support of the police, expanding gun rights, restricting abortion, and promoting free markets have made him very popular on the Brazilian political right.

Whether Bolsonaro’s near fatal stabbing can transfer into political victory at the national level is yet to be seen, but left-wing parties (such as the Worker’s Party) still have majority support in most of the country and are likely to ultimately win the second round of the election even if Bolsonaro sees a boost in support.