Did CNN Use a Fake Trump Voter to Spice Up Their ‘Trump Voters’ Panel? 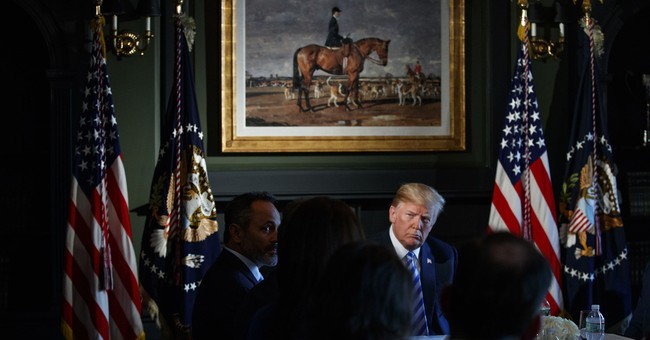 Last week on CNN’s Tuesday and Wednesday morning broadcasts of their “New Day” program, the network aired a two-part series of a panel discussion in which co-host Alisyn Camerota spoke with six supposed Trump voters about their perspectives on the president and his policies more than a year into his first term in office.

Based on the way that CNN edited and presented the panel discussion, Camerota apparently started it off by asking the six purported Trump voters how many of them were “still just as excited today as [they] were on election day” about President Trump. As it turned out, half of the panel said they were still happy with Trump while the other half said that they now regretted voting for him. Regardless of the implication of CNN’s presentation, this split among the network’s handpicked panelists in no way reflects the opinions of actual Trump voters. In fact, according to a recently released study by the Pew Research Center, 82 percent of Trump voters had “warm” or “very warm” feelings about the president as of March 2018, only slightly lower than the 87 percent who reported the same back in November 2016.

But CNN’s dishonest portrayal of Trump voters did not stop there. Instead of having a truly representative panel of people that could have a reasonable discussion about their agreements and disagreements with the president, CNN put a bona-fide member of the #Resistance on the panel who managed to recite practically every current Democrat talking point and conspiracy theory to attack Trump. After the first part of the panel discussion aired, CNN thought this man’s commentary was so enlightening that the network used his attacks on the president to headline a YouTube video on CNN’s official channel with the title: “Trump voter: The President is a monster.”

CAMEROTA: Jeremy, what do you regret about your vote?

CAMEROTA: Was there a moment that turned you?

MONTANEZ: It was when I heard about what was going on on the Southern border.

CAMEROTA: What part did you object to?

MONTANTEZ: Uh, the family separation, and the children in cages.

Later in the same segment, CNN’s edit of the panel discussion chose to include Montanez issuing an apology for voting for Trump as “the biggest mistake that [he] ever made” in his life. Montanez also said that his vote was, morally speaking, “the wrong thing to do” and that Trump “is a racist.” When Camerota asked Montanez to explain why he believed that Trump was a racist, Montanez accused Trump of deliberately withholding hurricane aid from Puerto Rico and leaving people there to die because they were not “white-skinned” enough:

“Why do I believe he’s racist? Look what happened in Puerto Rico. [Trump] said: oh, they want to just, uh, cry and, you know -- they needed help. Just because they’re not white-skinned, he doesn’t want to go down there and help them out?”

There is no indication from CNN’s edited version of the panel discussion that Camerota pushed back against Montanez’s extreme claims that Trump left people to die because they were Hispanic.

On Wednesday, part two of CNN’s “Trump voters” panel aired and Montanez’s role as a conduit for liberal attacks on Trump continued without pause. However, instead of accusing Trump of being a quasi-genocidal monster again, Montanez shifted his criticism towards accusing the president of being a puppet of Vladimir Putin and claimed that the Russian president “obviously…has something on [Trump]” for blackmail purposes:

“What bothers me more is that I think, um, he’s a suck-up to Vladimir Putin because I think obviously that country has something on him. Now whether it’s something legal, whether it’s helping him get elected, whether -- you know, whatever it is, he has something on this guy. So he’s gonna do whatever he can to include Russia to make us kind of maybe on the same level.”

When one of the other self-identified Trump voters who still supported Trump followed up on Montanez’s comments and questioned their logic, Montanez doubled down and gleefully insisted that Mueller was going to “get” Trump:

DAMANI BRYANT FELDER [TRUMP SUPPORTER]: If you’re gonna say that you believe that Russia has something on Trump-

FELDER: Given the language and the rhetoric around the mainstream media and given the copious amounts of leaks that we have received all throughout this administration, do you not think that if there was something that was detrimental to President Trump’s legitimacy or overall candidacy or fitness for office -- do you not think that that would not have been leaked by now? ‘Cause we’re almost two years into his first term.

Later in the segment, Montanez also reacted to Trump’s Helsinki remarks expressing skepticism about claims that Russia hacked the 2016 election. Montanez thought that Trump’s comments were clear evidence that the president “threw America under the bus.”

Taking all the above into consideration, it seems reasonable to say that any sane CNN viewer would be right to be skeptical about whether Montanez was really a Trump voter. Although it is possible that he was, the likelihood that any person would so thoroughly swallow the most vile and hateful anti-Trump narratives pushed by outlets like MSNBC and CNN from November 9th onwards but not have believed such narratives prior to that date seems minimal, to say the least. Alternatively, Montanez could have voted for Trump even while believing that he was a monster and a racist, but that does not seem likely either.

Furthermore, Montanez’s own statements lack a certain amount of internal consistency. Note that even though Montanez said he changed his mind about Trump after the relatively recent kerfuffle about separating families at the border, Montanez also readily spouted off media talking points accusing Trump of deliberately leaving Puerto Ricans to die because of their race after last year’s series of hurricanes caused widespread destruction across the island. This particular narrative was mostly promoted by specific MSNBC  personalities and San Juan Mayor Carmen Yulin Cruz in October 2017, months before the family separation crisis occurred. Perhaps coming to believe that Trump was a maniac who hated Latinos with a murderous indifference did not turn Montanez off from supporting Trump back then, but that too seems unlikely.

In any case, regardless of whether Montanez was an actual Trump voter, CNN clearly did its audience a disservice by promoting Montanez as being some kind of representative of Trump voters’ beliefs and changing political attitudes.

Just as a bonus, if you’re still on the fence about whether Montanez is a real Trump voter or not, consider a video that he posted on his YouTube channel back in June 2016 calling for a ban on “combat weapons” and urging any friends who disagreed with him to get out of his life forever:

“I am just so appalled and just disgusted by the mentality of a lot of people. I happen to have posted a comment very much lashing out on weapons-supporters in general -- I mean, at least that’s the way it sounded, and I tried to make it clear what I was talking about was combat weapons, meaning in the military or, you know, for the police. And I -- those are the ones that I have no business having and the general public have no business having and should be banned.

“If these people – meaning the guy that killed the fifty [Orlando shooter] and the son of a f*** that killed Christina Grimmie – did not have access to those weapons, all of those people would still be alive.

“If anybody that I am speaking to now that’s supposedly one of my friends supports anyone being able to own a weapon like that, please remove yourself. I ask you kindly. I am disgusted and appalled by it, but that’s your choice. But I will not associate myself with people like that.”

Feel free to make up your own minds on this one folks.