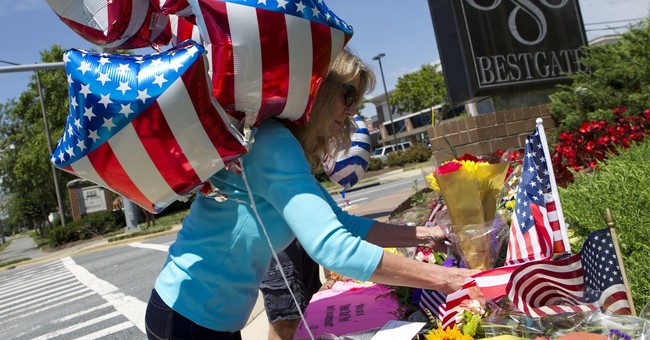 On Friday morning’s broadcast of “CNN New Day,” co-anchor John Berman brought on Terry Smith, a contributing columnist for the Capitol Gazette, to talk about yesterday’s horrific shooting at the newspaper’s main office in Annapolis. After discussing the crime and the five victims who lost their lives in detail, Berman and his guest went on to baselessly speculate that President Trump’s harsh criticism of the mainstream news media could have inspired the shooter to commit mass murder.

At the end of the interview, Smith concluded that regardless of whether Trump’s rhetoric was directly to blame for the mass shooting, it was certainly evidence that the Trump administration has been waging a “full-scale war on the press and…the First Amendment.”

Berman started the discussion of Trump’s anti-media comments and their potential connection with yesterday’s shooting:

“Look, you’d have to be blind and have not listened to anything for the last couple years to have not witnessed the changing tenor in this country. Do you think that played a role here? Or do you fear it puts journalism at risk?”

Smith responded with an emphatic “yes” before going on qualify his answer and walk it back somewhat, saying that Trump’s rhetorical contribution to Thursday’s massacre was “speculative”:

“It’s totally speculative what effect that had on Ramos, the shooter, obviously. But let’s face it, the atmosphere has changed. It’s acrimonious. It’s -- there’s a wide attack on the media going on. And we’re in an era of repeated mass shootings. Did either of those facts stimulate the shooter to do what he did yesterday? I cannot say.

“Just spoke with the police chief minutes ago, here this morning. He told me that they are still not receiving any useful information from the shooter, Ramos. He has been arraigned and jailed on no bond. But right now, he’s not talking.”

Apparently unhappy that Smith had strayed away from the CNN anchor’s question about Trump’s rhetorical attacks on the media, Berman honed in on the president’s past comment that the news media is the “enemy of the American people” and asked Smith to directly respond to the statement [emphasis mine]:

BERMAN: And we don’t know if there was a direct connection there, but what we do know and what you know, obviously, from your work is that journalists are not the enemy of the people, correct?

SMITH: They are not the enemy of the people, they are the people, part of the people. And in my obviously biased view, their function is really important, in a time especially like this whenfrom the very top there is a full-scale war on the press and a war on the First Amendment, if you like. And so, I think it’s never been more important, and in some ways, never more difficult.

“I think that sums it up perfectly,” Berman wholeheartedly agreed.

In contrast to Berman and Smith’s more indirect linking of Trump to the mass shooting, some CNN guests and hosts yesterday were far more straightforward in placing blame on the president for the massacre.

For example, on “Anderson Cooper 360°,” CNN analyst Asha Rangappa had the following hot take on the mass shooting as details were still coming in about the incident [transcript from NewsBusters, emphasis mine]:

[A]nd just to relate this back to kind of a bigger conversation that we've had this week about civility and rhetoric, you know, lone wolf actors are often alienated individuals who are looking to displace their anger and frustration onto some kind of outside entity or enemy, and I think it’s worth pointing out that we've had a constant rhetoric coming even from the President that the press is the enemy of the people, that's been repeated constantly, and I think it's worth noting if there is a link here that the publication was being targeted that that kind of rhetoric can be very dangerous in these times.

Earlier in the day, and with even less information available about the shooting, CNN national security analyst Juliette Kayyem speculated that the shooting could be linked to “political atmospherics…targeted against fake news and the media, and particular [sic] reporters.”

Of course, as has been reported by several reliable sources since yesterday evening, we have a pretty good idea of what the actual motive for yesterday’s Capitol Gazetteshooting was. Specifically, it appears to have stemmed from a nearly decade-long defamation dispute between the alleged shooter and the newspaper. According to CBS News:

A Twitter account matching Ramos' [the alleged shooter’s] name with a location of Laurel, Maryland, includes years of tweets railing against Capital Gazette and includes details of a yearslong [sic] legal dispute with the company.

According to an unreported 2015 opinion filed in the Maryland Court of Special Appeals, Ramos pleaded guilty to criminal harassment in July 2011. Five days later, an article about the case appeared in The Capital, one of Capital Gazette's publications. The story detailed accusations by a woman who said Ramos harassed her online and off for months, calling her employer and trying to get her fired. The woman eventually went to the police and Ramos pleaded guilty to a misdemeanor charge of harassment in 2011.

In July 2012, Ramos filed suit against Capital Gazette for defamation, according to the 2015 court filing. The complaint was just four paragraphs long, but Ramos filed a longer 22-page claim several months later.

In 2012, a judge dismissed the lawsuit on the basis that "there is absolutely not one piece of evidence, or an assertion by you that the statement [in the article] was false."

Despite this information being widely known by Friday morning, John Berman and Terry Smith still devoted time to trying to find a way to implicate President Trump in the mass shooting.

CNN posted Berman’s full interview with Smith on their official YouTube channel, which can be found at this link.