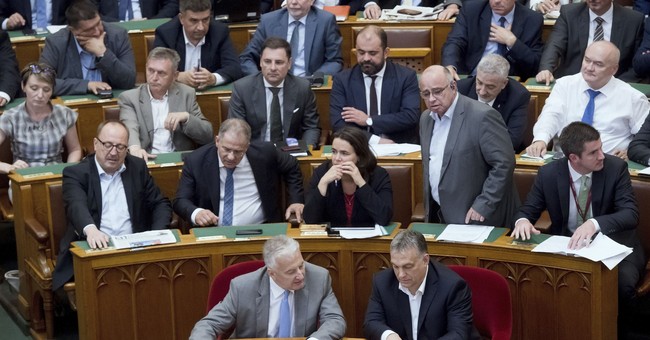 On Wednesday, the Hungarian parliament passed a series of laws that criminalize giving certain types of assistance to illegal immigrants. In the aftermath of the laws’ passage, liberal NGOs and human rights groups denounced the legal package – known informally as the ‘Stop Soros’ law – as an authoritarian measure that would make Hungary guilty of “persecuting” migrants, asylum seekers, and the groups that help them.

Amnesty International Europe Director Gauri van Gulik was especially incensed by the new laws, characterizing them as "a brazen attack on people seeking safe haven from persecution and those who carry out admirable work to help them” and further pledging to “resist” the laws “every step of the way.”

It’s official: #Hungary adopted one of the most serious attacks on civil society in Europe in a long time. The unflinching work of groups that defend rights in Hungary is more vital than ever, we’re with them loud and proud. #LexNGO2018 @AmnestyHungary https://t.co/z4hGOq3Zke

Helsinki Committee Co-Chair Marta Pardavi also had strong criticism for the new measures, lamenting that “instead of giving protection against persecution, the Hungarian government has decided to join the ranks of the persecutors.”

Before the law had even been passed, the Venice Commission – which works as a human rights advisory group for the Council of Europe (one of Europe’s most prominent quasi-governmental advisory bodies itself) – warned Hungary not to pass the laws until its review of them could be completed by this Friday.

But what were the actual provisions of the laws that so upset these liberal activists?

Firstly, one of the laws makes it a jailable offense (for up to twelve months) for anybody to help migrants apply for asylum when they do not legally qualify for asylum status. The law defines “help” by specifying a variety of different forms of aid, including distributing information about asylum applications, helping them to fill out the applications, and giving migrants money or other financial assistance.

Other laws actually amended the Hungarian Constitution, including a measure that makes it illegal to “settle foreign populations” in Hungary. This constitutional change appears to be a clear rebuke to German Chancellor Angela Merkel and the European Union’s far more lenient policies over the past few years that have encouraged millions of Middle-Eastern and African migrants to illegally trek through several European countries (such as Hungary, Greece, and Serbia) to seek asylum. The amendment is also a clear attempt to push back on immigrant quotas that the European Union is currently trying to force all its member states to accept. Another constitutional amendment that comes from the “Stop Soros” legislation calls for the establishment of a new parallel court system to deal with “cases related to public administration,” according to the New York Times.

This series of laws (among several others) passed the Hungarian parliament with barely any opposition. In fact, while a total of 159 legislators voted for the proposals, only five voted against them (out of a total of 199 members). The laws were originally proposed by Hungarian Prime Minister Viktor Orban's conservative nationalist “Fidesz” party, but also obtained support from the second most popular party in parliament – the ultranationalist “Jobbik” movement, which is generally opposed to all immigration into Hungary. During parliamentary elections earlier this April, Fidesz and their coalition partners from the Christian Democratic People’s Party won almost half of Hungary’s total popular vote and two-thirds of its parliament seats, with Jobbik winning just under twenty percent of the vote and more than an eighth of the parliament’s seats. Collectively, these electoral outcomes made it quite easy for the ‘Stop Soros’ legislation to pass.

It remains to be seen whether the European Union or some of its member states will try to sanction Orban and his government for the passage of the ‘Stop Soros’ laws, but Hungary appears to be determined to move ahead with its crackdown on illegal migrants regardless of such pushback. Prime Minister Orban explained his reasoning for supporting the new laws during a speech at a conference on Saturday:

Ladies and Gentlemen, can there be compromise in the migrant debate? No – and there is no need for it. There are those who imagine that each opposing side should make concessions, that they should reach out to each other and shake hands. This is a bad approach. There are questions on which there will never be agreement… Immigration is one such question. There is no document that we are aware of which states that if you enter the European Union you must become an immigrant country. When we entered we made no such commitment…

[T]here are immigrant countries in the EU, where migrants are welcomed, where people want to mix with them, and where people want to integrate them. And there are countries which do not want migrants, which do not want to mix with them, and where their integration is therefore out of the question. In such situations there is a need not for compromise, but for tolerance. We tolerate the fact that some Member States in the Schengen Area admit migrants. This has and will have consequences – including for us. Meanwhile they should tolerate the fact that we do not wish to do so. They shouldn’t lecture us, they shouldn’t blackmail us, they shouldn’t coerce us, but they should just give us the respect that is due to Member States…