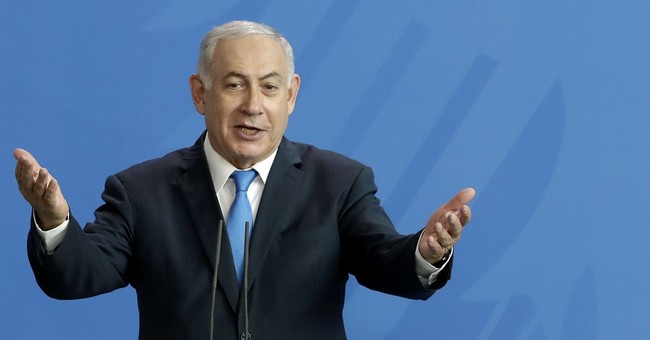 On Monday, Israeli Prime Minister Benjamin Netanyahu kicked off his diplomatic tour across Europe with a trip to Berlin to meet German Chancellor Angela Merkel. At their joint press conference, Netanyahu described Iran as an existential threat to Israel with “genocidal designs” to use nuclear weapons against the Jewish state. The prime minister also linked Iran’s intervention in the Syrian Civil War and its buildup of military forces there to the Islamic Republic’s broader plans for regional conquest in Lebanon and Yemen.

After remarking favorably upon Israel’s relationship with Germany and their countries’ peaceful economic and technological cooperation, Netanyahu turned to the topic of Iran, stressing that “we have great opportunities, but we also face great challenges. And I think the greatest challenge that the civilized world faces today is the danger that comes out from militant Islamic states that are bent on aggression and acquiring nuclear arsenals.” Of those “militant Islamic states,” Netanyahu singled out Iran as “the greatest danger” to peace and stability. Drawing upon a recent purported remark from Iran’s Supreme Leader Ali Khamenei, Netanyahu said that Israel continues to face the prospect of total destruction from Iran [emphasis mine]:

“Just yesterday, Iran’s leader Khamenei -- yesterday, he said again that Israel is a cancer that has to be eradicated, will be eradicated from the Earth. This is amazing that in the beginning of the 21stcentury, somebody talks about destroying Israel. It means destroying another six million plus Jews. It’s quite extraordinary that this goes on, but this is what we face. Iran calls for our destruction, but it’s also seeking nuclear weapons to carry out its genocidal designs. We know that for a fact.”

Netanyahu’s above comments were referring to his own allegations from late April that Israeli intelligence found evidence of an Iranian nuclear weapons development program that contradicted the regime’s repeated claims of only pursuing nuclear technology for peaceful purposes. At Monday’s meeting with Merkel, Netanyahu said that his government had shared and reviewed its intelligence with German government experts and also sent their findings to the International Atomic Energy Agency (IAEA). The prime minister urged the IAEA to fulfill its mission and investigate Iran’s nuclear program based on this new information. However, he also emphasized that Israel would not stand idly by to wait for the results of such an inquiry, unequivocally stating: “It’s important to prevent Iran from getting a nuclear weapon. We commit ? and I commit again ?that we will not let that happen.”

Netanyahu went on to highlight the potential danger for Europe in not countering Iran’s influence in the Middle East. Specifically, the prime minister warned Merkel that new Iranian-stoked religious tensions in Syria could intensify the conflict there and inspire another wave of refugees into Europe [emphasis mine]:

“But I think that there is another reason why this should be of concern to Germany. The Iranian military presence right now in Syria includes about 18,000 Shi’ite militia commanded by Iranian commanders. These Shi’ite militias come from Afghanistan, from Pakistan, from other places, and they have a specific goal, a military goal, but also a religious goal. Iran wants to increase the number of such militia to 80,000 and to basically conduct a religious campaign in largely Sunni Syria-- Syria is 96 percent Sunni --but try to convert Sunnis. This will inflame another religious war, this time a religious war inside Syria, and the consequences would be many, many more refugees, and you know exactly where they’ll come.”

It’s not clear where Netanyahu’s “Syria is 96 percent Sunni” claim comes from given that most estimates of Syria’s religious demographics put Sunnis at around 70 to 75 percent of Syria’s total population, but regardless of the precise number, an Iranian-backed paramilitary campaign to convert the majority-Sunni country to Shia Islam would certainly do little to quell tensions in the war-torn country.

After his stop his Berlin, Netanyahu is set to meet with French President Emmanuel Macron from Monday to Tuesday in Paris and with UK Prime Minister Theresa May in London from Wednesday to Thursday. Netanyahu is expected to use both his private and public meetings to continue to push for renewed sanctions and increased international pressure on Iran, but European leaders’ continued commitment to the Iran deal presents a serious practical obstacle for the Israeli prime minister as he makes his case. For her part, Chancellor Merkel re-affirmed her commitment to the Iran deal at Monday’s meeting with Netanyahu and expressed her hope that negotiations to revise the deal could be attempted in the future to address the Israeli PM’s concerns.