Finally! Trump Begins Work on 'The Wall', But Environmentalists Are Suing to Stop Him 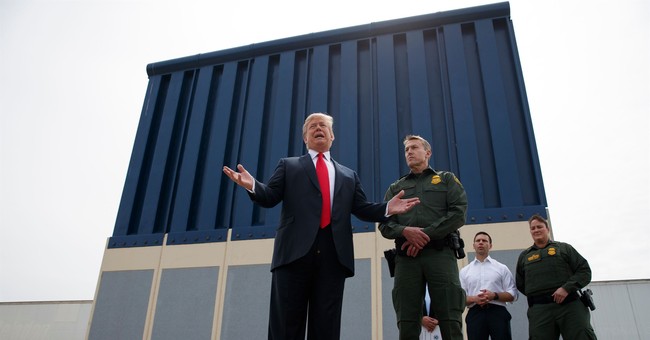 On Monday, the Trump administration scored a minor victory when it broke ground on construction for 20 miles of improved border wall near Santa Teresa, New Mexico, just a short drive across the Texas state border from El Paso.

The 20-mile segment in question already has a fence, but it is only a vehicle barrier with a waist-high metal beam running across alternating poles that reach up to average human height or slightly higher.

As you can see from the photo of the barrier above, there are huge gaps that can easily be walked through or leapt over by pretty much anyone who shows up at this section of the border.

According to U.S. Border Patrol, these vehicle barriers will be replaced with a wall chiefly composed of long metal pillars known as bollards. El Paso Sector Chief Aaron Hull explained what the wall should look like to Fox News:

“It’s 18 feet high. The bollards are filled with concrete. You got rebar running up inside. It goes six feet underground and two feet of concrete on top of that. A wall isn’t designed to stop everybody. But you would have to be one of the more determined illegal aliens to scale it, get through it or dig under it.”

A similar project to build a smaller two-mile bollard-style wall is also underway in Calexico, California, and another bollard wall should begin construction south of San Diego later this year. The Army Corps of Engineers is reportedly paying $73 million dollars to help complete the 20-mile section of wall in New Mexico. In total, the Trump administration’s latest budget appropriated about $1.6 billion for border security, part of which can go towards constructing additional bollard walls.

According to a September 2017 report from USA Today on the state of U.S. border security with Mexico, the kind of vehicle barriers set to be replaced in New Mexico and California are some of the only border defenses that America currently possesses.

Only 654 miles of the roughly 2,000-mile border has some type of security wall or fencing, and of that, 300 miles of fencing just consists of short vehicle barriers. That means that less than one-fifth of the border has any kind of substantial protection against illegal border-crossers.

But apparently, even Trump’s relatively small efforts to try and improve on this dismal situation are too much for committed leftist activists like those at the Center for Biological Diversity (CBD), which has filed multiple lawsuits against the administration for waiving federal laws to speed up construction of the bollard-style wall sections in New Mexico and California.

On March 22nd, CBD specifically sued the Trump administration for using waivers to start the process of building the 20-mile New Mexico bollard wall. In a press release touting the lawsuit, one of the center’s lawyers and representatives from several environmental groups that joined in the suit explained their reasoning for the legal action [emphasis mine]:

“The Trump administration is casting aside bedrock environmental protections to fulfill a hateful campaign promise,” said Jean Su, an attorney with the Center for Biological Diversity. “This waiver has expired, and Trump’s sweeping delegation of authority to Homeland Security is unconstitutional. It’s also an enormous waste of money, since border walls don’t stop illegal drug or human smuggling. But they do irreparable harm to communities and wildlife.”

“Construction of the border wall would cause permanent and irreparable damage to over a hundred endangered and threatened species that call the border area their home,” said Stephen Wells, executive director of the Animal Legal Defense Fund. “The wall would literally divide animal families, interfere with breeding and migratory patterns and ultimately may result in the extinction of many of these species. These are the very irreparable harms meant to be prevented by the environmental laws the secretary of the Department of Homeland Security has unilaterally waived.”

“Our nation's environmental laws protect both people and wildlife from bad decisions. Waiving these safeguards to rush construction of President Trump's ill-conceived border wall will no doubt adversely impact the communities and wildlife along the border,” said Jason Rylander, senior attorney at Defenders of Wildlife.

“By waiving these laws in the name of bringing law and order to the region, DHS is literally making the border lawless,” said Kevin Bixby, executive director of the Southwest Environmental Center. “Our wildlife and communities deserve the same legal protections as every other community in America.”

In a press release issued on Monday announcing CBD’s decision to appeal a ruling that quashed another one of their lawsuits against the Trump administration, the center’s senior attorney Brian Segee used very similar language to attack Trump’s border wall construction projects in California, which he described as a “rampage to fulfill a hateful political promise” that would “inflict” terrible damage on “communities and wildlife” [emphasis mine]:

“Trump is ignoring bedrock environmental protections and relying on a congressional waiver that expired years ago. He’s on a rampage to fulfill a hateful political promise, bulldozing forward with no concern for how much damage these walls will inflict on communities and wildlife. This lawlessness and executive overreach needs to stop.”

“Trump has an irrational obsession about the border, and Congress has indulged him. It’s up to the judicial system to restore some sanity and stand up for these spectacular borderlands. The communities and wildlife along the border need and deserve legal protection.”

No matter how upsetting it might be to see a couple species lose some areas of their habitats, this has absolutely no comparison to America losing its sovereignty and its capacity to provide for the safety and security of its citizens. Nations that do not secure their borders for decades tend to develop slightly larger problems than losing out on the benefits of having Quino checkerspot butterflies or coastal California gnatcatchers, and we can see the results of that in the United States today. Whether it’s the broad proliferation of illegal drugs, the spread of violent organized crime, or the more than $100 billion dent in the budget that perfectly nice and peaceful illegal aliens help cause, U.S. citizens continue to pay real penalties for our unsecured border.