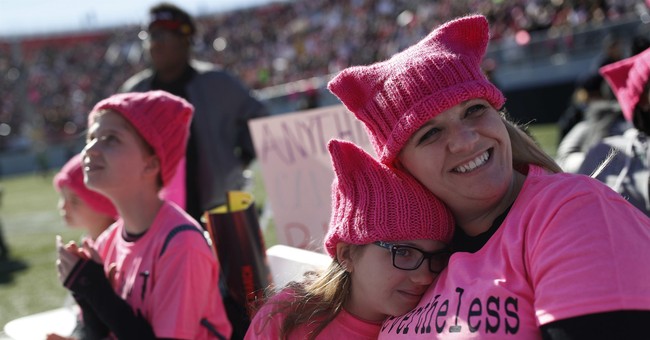 This weekend, the pro-cop killer Women’s March further tested the limits of humanity’s moral endurance by protesting the U.S. government’s seizure of Backpage.com, a website that was allegedly used to facilitate both adult and child prostitution.

The Women’s March’s official Twitter described shutting down the website as an “absolute crisis for sex workers”:

. The shutting down of #Backpage is an absolute crisis for sex workers who rely on the site to safely get in touch with clients. Sex workers rights are women’s rights. Follow @SafeSpacesDC @melissagira @swopusa @KateDAdamo @supporthosechi @anaorsomething for more info. https://t.co/S3Orx3aM8Z

In the coming days, we will be sharing more about sex workers rights to uplift this critical issue. We’re all still learning and as always, we have to listen to the voices of those most impacted. #SexWorkIsWork

The Women’s March also encouraged its supporters to read a rambling thread from a Twitter user who preached that the government shouldn’t be in the business of “rescuing” “sex workers,” who instead should “have agency and autonomy and make the BEST decision for themselves”:

Listen to Black sex workers ! We support everyone’s ability to work! Sex work is work. Sex workers deserve to work free from violence (especially at the hands of the state) and should be provided the resources and tools needed to make their own decisions. https://t.co/Z5oUAmt6Nk

Sex workers have agency and autonomy and make the BEST decision for themselves.

Sex workers deserve to be treated with dignity and respect.

Sex workers should not be criminalized.

All of this #SexWorkIsWork rhetoric strangely skirts what appears to be the most significant element of the story, namely the allegations that the site allowed for (or at least did not do enough to prevent) child prostitution. According to Politico [emphasis mine]:

Backpage and its founders have been the subject of intense investigation by the Senate Homeland Security Committee in recent years. Critics said the site not only promoted illegal prostitution but facilitated sex trafficking and sexual abuse of children.

Sen. Rob Portman (R-Ohio), who was the lead Republican on a Senate investigation into Backpage called the action "overdue" and said it was good news for victims. "It is a positive step forward in our efforts to hold accountable sex traffickers that sell women and children online," he said in a statement.

“This is great news for survivors, advocates, and law enforcement in Missouri and across the country, but it’s also long overdue, and further proof of why our bipartisan legislation is so critical," McCaskill said in a statement. "State and local law enforcement need this bill to enable them to take swift action against websites that knowingly facilitate sex trafficking of children online, and to stop the next Backpage long before another website can claim so many innocent victims.”

If Backpage truly was a party to child sex trafficking, there should be no question that the website needed to be shut down.

Of course, normally, it would be difficult to believe that an organization like the Women’s March — which enjoys widespread support from liberal and progressive Democrats — would feel comfortable openly supporting a website like Backpage. Then again, the Women’s March is the same organization whose board member Linda Sarsour once tweeted she wished she could “take away” the vaginas of Brigitte Gabriel and Ayaan Hirsi Ali (who was a victim of child genital mutilation herself) for criticizing Islam.

In April 2017, Sarsour also endorsed a convicted murderer who blew up and killed two Israeli students back in 1969. According to the Daily Caller [emphasis mine]:

Earlier this month, Sarsour spoke alongside — and gave a warm embrace to — Rasmea Odeh, an alleged member of the terrorist-designated Popular Front for the Liberation of Palestine. Odeh, 69, was convicted in Israel in 1970 of taking part in two bombings the year before, one at a supermarket in Jerusalem and another at the British consulate. Two Israeli students were killed in the supermarket bombing. Nine were injured in the two blasts.

After serving 10 years in prison in Israel, Odeh was able to immigrate to the United States.

Sarsour said she felt “honored and privileged to be here in this space, and honored to be on this stage with Rasmea.”

In addition to the Women’s March’s past endorsements of cop-killing terrorist Assata Shakur and unrepentant torture-murderer Donna Hylton, it is unfortunately all too believable that the group would sink to the level of ignoring child sex trafficking.