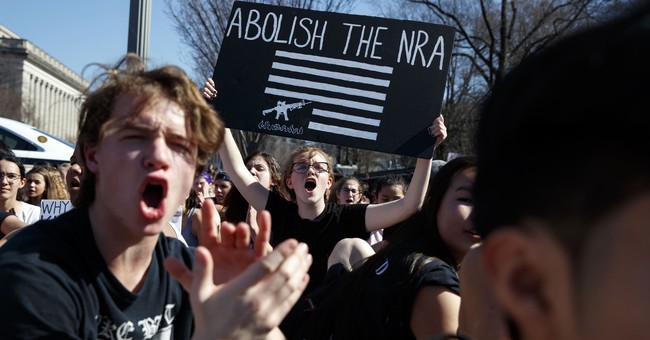 On Wednesday, thousands of students across America participated in a national school walkout to agitate for gun control one month after the mass shooting at Stoneman Douglas High School in Florida.

While many of the protestors from more than 3,000 separate events are staying on their school campuses to protest, some have marched on their local statehouses and even Capitol Hill itself to demand new gun control laws. Prominent Democratic politicians like Sen. Chris Murphy (CT), Sen. Richard Blumenthal (CT), Sen. Bernie Sanders (VT), Rep. Luis Gutierrez (IL), and others walked out of the Capitol building to personally speak to and laud the student activists for their efforts.

Joining #NationalWalkoutDay in memory of #ParklandShooting & so many other shootings across this country. I am inspired by this generation of Americans who are using their voice to effect change. Livestream here: https://t.co/COCF7Glsyk

Empower, which is the official youth wing of the Women’s March, is the primary organizer for the #Enough National School Walkout (also being promoted as #NationalWalkoutDay on Twitter). On their website’s FAQ for the event, Empower explained their reasons for setting up the walkout:

“We are living in an age where young people like us do not feel safe in our schools. This issue is personal for all of us, especially for those of us who are survivors of gun violence. We are walking out for ALL people who have experienced gun violence, including systemic forms of gun violence that disproportionately impact teens in Black and Brown communities. It is important that when we refer to gun violence, we do not overlook the impact of police brutality and militarized policing, or see police in schools as a solution. We also recognize the United States has exported gun violence through imperialist foreign policy to destabilize other nations. We raise our voices for action against all these forms of gun violence.”

In spite of their public façade of being anti-violence, the Women’s March has a troubling history of honoring cop killers and murderers both on social media and at their official events.

Last summer, the Women’s March wished a happy birthday to Assata Shakur on their official Twitter:

Shakur, whose real name is Joanne Deborah Chesimard, is a convicted cop killer and prison escapee currently on the lam in Cuba due to her involvement with the Black Liberation Army (BLA). According to the International Centre for the Study of Radicalisation, the BLA was one of the most violent black power terrorist groups in the United States during its heyday [emphasis mine]:

The group made its violent debut in June 1971 with a machine-gun attack on two New York policemen guarding the Manhattan district attorney’s apartment. Two days later, two police officers were shot to death while on patrol in Harlem. In a letter delivered to local media, the BLA announced that “the armed goons of this racist government will again meet the guns of oppressed Third World Peoples as long as they occupy our community and murder our brothers and sisters in the name of American law and order.”

Throughout is existence, the BLA framed its violent attacks on police as a legitimate response to the forces of colonial occupation in the nation’s ghettos. As Shakur declared, “[o]ur backs are against the wall [and] now more than ever we need an army to defend ourselves and fight for our liberation.” During the next three years, the BLA wounded or murdered policemen in New York, New Haven, Philadelphia, Atlanta and St. Louis. The BLA’s area of operations extended as far as San Francisco. In August 1971, members carried out a string of bank robberies, attempted to murder a policeman, and mounted a nine-person attack on a precinct house that left a police officer dead.

On May 2, 1973, as two New Jersey state troopers stopped her car for traffic violations, Shakur put her words into action. Along with two accomplices who were with her, Shakur opened fire on the two cops. In the resulting shootout, one trooper was killed when he was shot in the back of the head with his own service revolver. The second officer was wounded, but managed to survive the encounter. One of Shakur’s compatriots was killed as well, while the other remains in jail to this day.

After her conviction for murdering the trooper (among other offenses, including armed robbery) in 1977, Shakur was sentenced to a life term, but she escaped from prison in 1979. At some point in the early 1980s, she made her way to communist Cuba as a “political refugee.” In 2013, the FBI put out a million dollar reward for information leading to Shakur’s arrest. She remains on the agency’s infamous “Most Wanted” terrorist list and holds the dubious distinction of being the first woman placed on it.

What a role model for the youth of America.

But Shakur isn’t the only convicted murderer that the Women’s March thinks is a paragon of virtue for American society. Donna Hylton, who spoke at the original January 21st Women’s March on Washington, participated in the brutal multiple week-long torture-murder of real estate broker Thomas Vigliarole in 1985. Along with three other women and three men, Hylton kidnapped Vigliarole with the intention of trying to make money from ransoming him. (One of Hylton’s accomplices believed that Vigliarole had cheated him out of money on a con scheme that they were jointly running.)

However, instead of leaving it at just kidnapping, the group ended up torturing the 62 year-old man to death. Over a period of 15-20 days, Vigliarole was starved, beaten, burned, crushed, sodomized with a three-foot metal pole, and ultimately suffocated to death before being stuffed in a trunk and left to rot. Hylton and her partners in crime were caught by the police after she personally delivered a ransom note for Vigliarole to one of his friends, who took down a partial license plate of her car.

Hylton only served 25 years in prison for her gruesome crimes.

On her official website, Donna portrays herself as a “women’s rights activist and criminal justice reform advocate” who actively travels the country speaking out against “mass incarceration” and “prison gender inequality” while advocating on behalf of “women who have been victims of abuse and the criminal justice system.”

Before pretending to care about victims of gun violence, maybe the Women’s March should be held to account for its repeated promotion of murderers and violent gun criminals and terrorists first.