Pope Francis Chides Pro-Life Christians, Those Who Do Not Embrace 'Migrants' 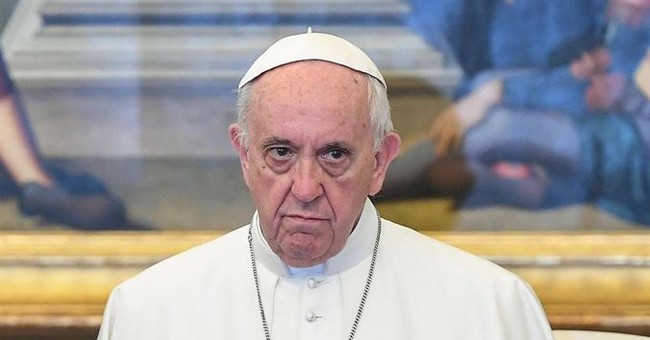 On Monday, the Vatican published an official apostolic exhortation titled “Gaudete et Exsultate” (“Rejoice and Be Glad”) in which Pope Francis argued that, in order to live a life of “holiness,” Christians around the world should welcome “migrants” of all types into their countries as their “brothers and sisters” and provide them with welfare.

Francis also suggested that people who regard helping “migrants” as secondary in importance to stopping abortions are bad Christians who have lost focus on what is important in life. The Pope did not directly address what he thinks of Christians who believe in national sovereignty and borders.

The central premise of Francis’s argument comes from the Gospel of Matthew, Chapter 25, in which Jesus told his followers that they would be judged by God based on whether or not they had helped the needy. Francis explained [emphasis in bold mine throughout]:

In the twenty-fifth chapter of Matthew’s Gospel (vv. 31-46), Jesus expands on the Beatitude that calls the merciful blessed. If we seek the holiness pleasing to God’s eyes, this text offers us one clear criterion on which we will be judged. “I was hungry and you gave me food, I was thirsty and you gave me drink, I was a stranger and you welcomed me, I was naked and you clothed me, I was sick and you took care of me, I was in prison and you visited me” (vv. 35-36).

Indeed, performing good works and providing charity for the downtrodden are both essential callings for all Christians, but what does this necessarily have to do with “migrants”? Before making his case for an inextricable link between supporting open borders and charity, however, Francis took the opportunity to attack pro-life Christians who dedicate their focus to issues like abortion and even insinuated that they do not do enough to help the poor:

The other harmful ideological error is found in those who find suspect the social engagement of others, seeing it as superficial, worldly, secular, materialist, communist or populist. Or they relativize it, as if there are other more important matters, or the only thing that counts is one particular ethical issue or cause that they themselves defend. Our defence of the innocent unborn, for example, needs to be clear, firm and passionate, for at stake is the dignity of a human life, which is always sacred and demands love for each person, regardless of his or her stage of development.

Equally sacred, however, are the lives of the poor, those already born, the destitute, the abandoned and the underprivileged, the vulnerable infirm and elderly exposed to covert euthanasia, the victims of human trafficking, new forms of slavery, and every form of rejection. We cannot uphold an ideal of holiness that would ignore injustice in a world where some revel, spend with abandon and live only for the latest consumer goods, even as others look on from afar, living their entire lives in abject poverty.

After bringing up this socialist argument about the horror of wealth inequality, Francis argued that migrants — being materially worse off than Christians in Europe and the U.S. — fall within the scope of the disadvantaged poor, and thus deserve Western largesse.

In addition, the Pope once again condemned Christians who worry about “grave bioethical questions” like abortion but do not devote equal time to supporting open borders:

We often hear it said that, with respect to relativism and the flaws of our present world, the situation of migrants, for example, is a lesser issue. Some Catholics consider it a secondary issue compared to the “grave” bioethical questions. That a politician looking for votes might say such a thing is understandable, but not a Christian, for whom the only proper attitude is to stand in the shoes of those brothers and sisters of ours who risk their lives to offer a future to their children. Can we not realize that this is exactly what Jesus demands of us, when he tells us that in welcoming the stranger we welcome him (cf. Mt 25:35)?

A similar approach is found in the Old Testament: “You shall not wrong a stranger or oppress him, for you yourselves were strangers in the land of Egypt” (Ex 22:21). “When a stranger resides with you in your land, you shall not oppress him. The stranger who resides with you shall be to you as the citizen among you; and you shall love him as yourself; for you were strangers in the land of Egypt” (Lev 19:33-34). This is not a notion invented by some Pope, or a momentary fad. In today’s world too, we are called to follow the path of spiritual wisdom proposed by the prophet Isaiah to show what is pleasing to God. “Is it not to share your bread with the hungry and bring the homeless poor into your house; when you see the naked, to cover him, and not to hide yourself from your own kin? Then your light shall break forth like the dawn” (58:7-8).

I’m no biblical scholar. In fact, I’m pretty certain I would handily lose any head-to-head theological debate with the Pope. But Francis’s arguments seem to rely on a pretty shaky foundation here — namely, the notion that the Bible does not support the existence of nations or borders.

According to Dr. James Hoffmeier, a professor of Old Testament History and Archaeology at Trinity International University, this assumption is incorrect. In a piece written for the Center for Immigration Studies back in 2011, Dr. Hoffmeier argued that the Bible’s references to welcoming strangers do not apply to every foreigner wishing to enter a country:

From the foregoing texts we can conclude that in the ancient biblical world, countries had borders that were protected and respected, and that foreigners who wanted to reside in another country had to obtain some sort of permission in order to be considered an alien with certain rights and privileges. The delineation between the “alien” or “stranger” (ger) and the foreigner (nekhar or zar) in biblical law is stark indeed.

In a sense, the ger were not just aliens to whom social and legal protections were offered, but were also considered converts, and thus could participate in the religious life of the community, e.g. celebrate Passover (Exodus 12:13) and observe Yom Kippur, the day of atonement (Leviticus 16:29-30). They were, moreover, expected to keep dietary and holiness laws (Leviticus 17:8-9 & 10-12). It is well known that within Israelite society, money was not to be lent with interest, but one could loan at interest to a foreigner (nekhar).

These passages from the Law make plain that aliens or strangers received all the benefits and protection of a citizen, whereas the foreigner (nekhar) did not. It is wrong, therefore, to confuse these two categories of foreigners and then to use passages regarding the ger as if they were relevant to illegal immigrants of today.

Regardless of the biblical merits of Francis’s or Hoffmeier’s respective arguments, one thing at least seems inarguable, and that is that Pope Francis’s continued advocacy of left-wing political positions and his dismissal of pro-life advocates as being overly focused on abortion are unlikely to heal the growing rift between American Catholics and a church that appears increasingly deaf to their political and religious concerns.