The Republican Challenge: Can the GOP and the Tea Party Activists Find Common Ground? 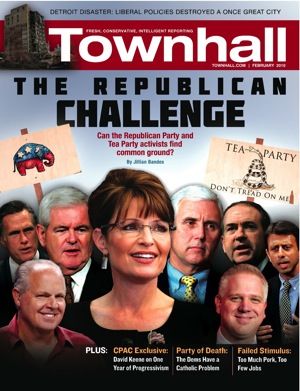 First there were the tea parties and town halls.

Then there were the GOP gubernatorial victories in Virginia and New Jersey.

And just a couple weeks ago Scott Brown rode the grassroots wave to victory in the People’s Republic of Massachusetts to replace liberal lion Teddy Kennedy in the U.S. Senate.

Democrats are getting worried, which is why many are retiring from Congress or looking for ways to moderate after a year of far-Left Democratic rule.

The February issue of Townhall Magazine explains why the 2010 midterms are looking better and better for the Republicans and how it may be the perfect setup for 2012—but only if the GOP sticks to its small-government, pro-freedom, low-tax roots.

One of the issues leading to the outrage that spread across the country was the president’s “stimulus” package. What we know now is that the recovery package, which did anything but help the U.S. recover, was used for expenditures that ranged from silly to almost criminal. We get into that, too, in the February issue.

Do you want to really understand the effects of progressive policies? Take a look at Detroit. Liberalism has put Detroit and other U.S. cities on life support. We have a close examination of Detroit’s destruction at the hands of the left.

Democrats’ ties to the abortion industry is also going to cost them. We’ve seen them over just the last week lose their cool over Tim Tebow’s decision to support life rather than abortion. The Left has shown how unhinged they become when anyone chooses innocent to protect the life of the innocent unborn—so much for a pro-choice movement. And it could cost them in 2010 and 2012 when Catholic voters realize what the Democratic Party is up to—Townhall has it covered.

And are you far from comfortable with the Obama administration’s foreign policy moves? Well, what are they going to do with China? It’s one of the many security questions the Obama White House is not addressing. Luckily, we’re here to examine the China challenge.

Plus, Joe “You Lie” Wilson, R-S.C., gives us an exclusive interview about who’s telling the truth in D.C., how his life has changed since calling out the president and what’s in store for the GOP in 2010; and Danny Tarkanian, a leading GOPer to take out Harry Reid in Nevada, explains to us why he has what it takes to beat the majority leader.

Jillian Bandes’ cover story for the February issue, “Red Alert!”, examines why Democrats are in trouble in 2010, Republicans are hopeful, and GOP presidential contenders are pushing for big wins in November. But Republicans need to remember that the same anger that’s currently being aimed at the Democratic majority could just as easily turn their way if they ignore the small-government message of the tea parties.

It’s in vogue for Republicans to say the 2010 mid-term elections are going to be a repeat of the 1994 Republican Revolution, when the GOP enjoyed whirring electoral successes in all levels of government, taking control of Congress for the first time in 40 years. The parallels between 1994 and 2010 are, after all, striking: health care reform that sits in Americans’ stomachs like a gallon of month-old milk; economic “recovery” packages with non-existent results; and a Democratic president with approval ratings that make even his opponents take pity on him.

Critics of the Republican Revolution would be remiss not to agree that 2010 may hold some stark similarities to that fateful November in 1994. Liberals like to say the 1994 elections were manipulated by a small cadre of undercover conservative operatives. Today, that cadre has morphed into a massive, nationwide tea party movement that makes Obama-maniacs look like pansies. If backroom conservatives hijacked the 1994 election, 2010 will be influenced by limited-government activists whose main trademark is that they’re not in a backroom. …

It’s possible that 2010 could be the perfect set-up for the GOP to retake the White House and rebuild strong majorities in both houses of Congress in 2012. But they’re not going to do it if they don’t get their game plan together or if the game plan doesn’t include the tea party movement that has swept the country.

If the Republicans don’t stick to small-government principles, the tea partiers—who are not allied with either side of the aisle—will work to throw them out on their ears, too.

In “The Stimulus That Wasn’t,” Fred Lucas writes that one year after President Obama pushed his recovery act through Congress on a near party-line vote, Americans are still seeing too much pork and too few jobs.

The failure of the stimulus should come as no surprise. The first stimulus, a far more modest $150 billion under Bush in the form of tax rebates in 2008, did virtually nothing for the economy.

Japan’s economy couldn’t take any more stimulating after numerous Keynesian measures further devastated an already weak economy in the 1990s, spending a total of almost $1 trillion after various versions of stimulus initiatives. The final $70 billion stimulus in 1999 brought that country’s debt of to 128 percent of its GDP.

That should leave us wondering how bad things might get before the president—or voters—seek a change of course.

“It’s fiscal child abuse,” said Chris Edwards of the Cato Institute. “This is something that needed more attention. Even if you create some jobs with it now, you are going to damage or destroy that many jobs down the road when the government has to raise taxes to pay down that debt. At best, we’re benefiting a little bit now for damage to future generations. We’re making a moral judgment here that our consumption right now is worth more than the incomes of young people down the road.”

Townhall contributing editor Meredith Jessup has a powerful piece on the sad and depressing state of Detroit. “Subsidizing Urban Decay” uses the ruin of the Motor City to demonstrate how progressives’ liberal agenda has destroyed a once great city.

To get an idea of what life is like in today’s urban America and how leftist big-government policies continue to deteriorate once great cities, look at Ground Zero of inner-city decline: Detroit, Mich. The city that was once one of the wealthiest in the country now stands as a shell of its former self, decrepit and offering a surreal picture of urban decline more reminiscent of a war-torn landscape than one of America’s largest urban centers.

In its prime, Motown was one of the greatest cities in the world. As the birthplace of the American automotive industry, Detroit boasted large factories that shipped American cars to locations around the world. The city’s downtown was dotted with architectural gems and bustling social scenes. By the 1950s, the city’s success garnered the nation’s highest median incomes for Detroit workers, and Detroit families enjoyed the highest homeownership rates of any major American city.

However, for the last half-century, Detroit has been governed by liberal progressives, and today, the city landscape resembles a war zone: crumbling buildings decorated with tag graffiti; children roaming desolate streets; wide stretches of land where once whole neighborhoods stood now sitting vacant as overgrown “urban prairies”; men—young and old—loitering around street corners and liquor stores; and more and more young teenage girls taking on the duties of motherhood. The city’s population pool has drained by more than 50 percent and average home prices have plummeted to an average of just $6,000.

“Obama’s (and the Democrats’) Catholic Problem” lays out another obstacle for the Dems in the elections: The president and his party are so staunchly pro-abortion that it may cost them serious support from the nation’s largest religious voting bloc in 2010 and 2012.

As the world’s most populous nation and one of the last communist strongholds amasses political, economic and military power, the United States and the rest of the world must decide on a strategy for handling relations with the “Middle Kingdom.” Peter Brookes takes the issue head on with “The China Challenge: Partner or Peril?”

More from the February issue:


*Rep. Joe “You Lie” Wilson gets to the truth about the Obama agenda.

*S.E. Cupp urges liberals to check out NASCAR and learn something about America.

*Will Smith goes gaga for Obama.

*Voters tell California where to go.

*Letter-writers urge throwing out every single member of Congress.

*What’s at stake in the battle over financial reform.

*Lefty Bill Press gets slapped down.