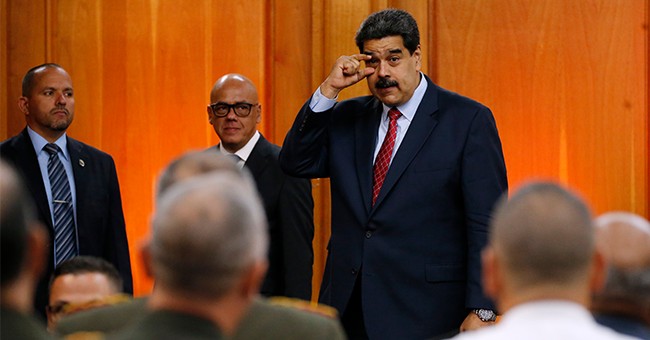 On Monday, the administration of President Joe Biden lifted a major Trump-era sanction that prevented foreign companies from exporting propane to Venezuela.

The sanction, which was enacted by the administration of former President Donald Trump in 2019, was designed to cripple the regime of Venezuela’s socialist president, Nicolás Maduro. Despite having one the world’s largest oil reserves just decades ago, years of economic mismanagement and the embargo on foreign oil led to a massive gasoline shortage in Venezuela last year.

In accordance with Biden’s authorization, the United States Treasury has issued a license allowing foreign oil companies to export liquefied petroleum gas without fear of punishment. The license is valid for one year, according to the Associated Press.

The decision also comes in stark contrast to the president’s stance less than a month ago, when Maduro called on the White House to weaken the oil sanction against his country. Biden declined, saying that Maduro needed to do more toward restoring democracy before the United States would consider his request.

However, the idea that Maduro has somehow made democratic progress in the last few weeks is absurd. Juan Guiadó, Venezuela’s opposition leader who battles Maduro for political legitimacy, was harassed by Maduro’s security forces, who threatened to arrest him at gunpoint.

The forces ultimately withdrew after protests from Guiadó’s neighbors, only to turn their attention toward key Guiadó ally Freddy Guevara. While driving his car on a Caracas highway on Monday, Guevara was arrested by intelligence agents on bogus charges of “terrorism” and “treason.”

In the U.S., conservative politicians were quick to condemn the Maduro regime’s authoritarian ways. Sen. Rick Scott (R-FL) called upon Biden to both reverse its decision to end the sanctions, as well as to condemn the “attacks against democracy” in Venezuela and Cuba.

Yesterday, as @NicolasMaduro's thugs raided the home of Interim Pres. @jguaido, the Biden admin approved aid to Maduro. This blatant weakness toward the oppressive Maduro regime is unacceptable & exactly what the Communist Cuban regime wants. He must reverse this decision now. https://t.co/rmJD9oisS0

Attacks against democracy in Venezuela cannot be tolerated & @POTUS should act swiftly to condemn them. As the Cuban people march for freedom, the communist regime is trying to create chaos across LATAM.

Maduro’s reign of terror must end. The communist Castro regime must end. https://t.co/EeQA0FXuOL

But despite its quest to attack the “root causes” of problems stemming from Latin America, the Biden White House has been reluctant to call out the evils of socialism and communism that are contributing to the mess in both Venezuela and Cuba. On Sunday evening, U.S. Assistant Secretary of State for Western Hemisphere Affairs Julie Chung implied that concerns about the Wuhan coronavirus, not 60 years of communist rule, were driving the protests in Cuba.