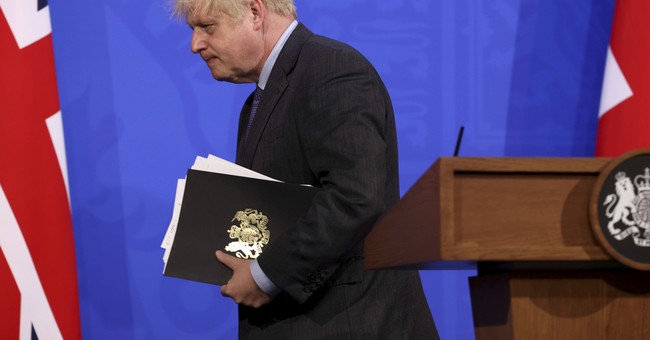 On Tuesday, British Prime Minister Boris Johnson announced that nearly all of England’s Wuhan coronavirus restrictions will be lifted. Wearing masks will no longer be legally mandated, and social distancing guidelines will give way to what Johnson calls “personal responsibility” and the need to “live with” the virus.

Pending Johnson’s government’s review of the latest data next Monday, the end of the restrictions will proceed on July 19 -- a date many Tories and Johnson supporters have dubbed “Freedom Day.”

The rest of the United Kingdom -- composed of Northern Ireland, Scotland, and Wales -- is following its own reopening protocols. These reopenings generally follow a similar timeline to that of England’s.

Johnson defended his decision to lift restrictions in an announcement, saying that the alternative, opening during the winter months “when the virus will have an advantage," would be more deadly and prevent society from ever returning to normal.

As we come to the fourth step, we have to balance the risks – the risks of the disease and the risks of continuing with legally enforced restrictions that inevitably take their toll on people’s lives and livelihoods. pic.twitter.com/AqI2nYxpaz

Johnson’s decision was met with the predictable backlash from politicians and public health organizations. Keir Starmer, leader of the opposing Labour Party, criticized the prime minister’s decision as “reckless” and suggested that Johnson will be responsible for the increased prevalence of the new Delta variant. Ironically, the left-leaning Starmer also took a swipe at Johnson for leaving the UK’s borders open.

Let's call the Delta variant what it is: the Johnson variant.

Concurrent with the July 19 reopening, Johnson’s government will no longer instruct employees who have the capability to work from home to do so. The Bank of England has followed Johnson’s lead by allowing employees to return to their offices one day a week, and it hopes to allow all employees to work in person full-time in September.

British bars and nightclubs will be permitted to open for the first time in more than 16 months, and restaurant patrons will no longer have to provide their contact information to the establishments they frequent.

There is sound reasoning behind Johnson’s decision to lift England’s restrictions. 86 percent of the population has received their first vaccine dose and 64 percent are fully vaccinated -- much greater than the U.S. vaccination rates of 67 percent and 58 percent, respectively.

Still, Johnson remains cautious. His reopening plan upholds the recommendation of face coverings in enclosed spaces, such as on public transit. And though he is vaccinated, Johnson himself has vowed to continue wearing masks on occasion as a “personal courtesy.”

By ending one of the world’s most restrictive lockdowns, the UK is at a crossroads. But hopefully, reopening society for its highly-vaccinated population will be a thorn in the side for those still advocating aggressive lockdowns after living through the last year-and-a-half.