Seizing at a "Diplomatic Solution" in Syria? 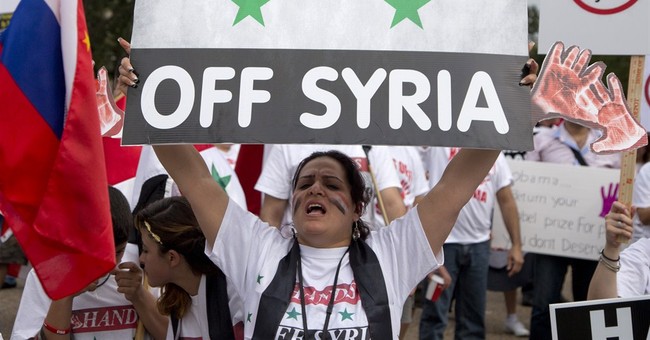 The depths of the fiasco in which the Obama administration has embroiled America on the Syria issue are almost impossible to fathom.  What a debacle.

Based on the transcripts of his interviews today, it looks like the President -- aware that he is supported by neither a majority of Congress nor a majority of the country -- may be trying to seize on the potential of a "diplomatic solution" that would allow him to save face.  The putative plan would presumably be to hail every piddling concession offered by Assad as a major victory elicited by the President's threat to use force.

As always, of course, The White House is thinking primarily about domestic politics.  The goal is to spare the President the public humiliation of a repudiation by Congress (whose input he himself sought!) and which would weaken him immeasurably in upcoming negotiations on domestic matters.  And make no mistake: If they are able to get even the flimsiest "deal," there's a great likelihood that the President will try to claim victory and move on.

But there are at least two problems with this scenario, even if it works out as sketched above.  First, the President's credibility -- and by extension America's --  will still be enormously damaged.  Remember all the talk about "red lines," specifically the President's original comments offered on August 20, 2012?  Here's the relevant exchange:

Q  Mr. President, could you update us on your latest thinking of where you think things are in Syria, and in particular, whether you envision using U.S. military, if simply for nothing else, the safe keeping of the chemical weapons, and if you're confident that the chemical weapons are safe?  . . .

I have, at this point, not ordered military engagement in the situation.  But the point that you made about chemical and biological weapons is critical.  That’s an issue that doesn’t just concern Syria; it concerns our close allies in the region, including Israel.  It concerns us.  We cannot have a situation where chemical or biological weapons are falling into the hands of the wrong people.

Q  So you're confident it’s somehow under -- it's safe?

THE PRESIDENT:  In a situation this volatile, I wouldn’t say that I am absolutely confident.  What I’m saying is we’re monitoring that situation very carefully.  We have put together a range of contingency plans.  We have communicated in no uncertain terms with every player in the region that that’s a red line for us and that there would be enormous consequences if we start seeing movement on the chemical weapons front or the use of chemical weapons.  That would change my calculations significantly.

Whatever political happy face the administration would try to put on the situation, the rest of the bad guys in the world would know: Obama's threats mean nothing.  That will make the world considerably more dangerous -- and every American considerably less safe -- for at least the rest of Obama's term.

Second, to the extent that Putin is able to insert himself into this "diplomatic process" -- and it's hard to see how Obama avoids this -- the President's political face-saving serves to strengthen the global mojo of one of our greatest global adversaries.  Putin is not America's friend, but in this this scenario, he emerges as the real geopolitical victor, with enhanced credibility on the world stage.  There's a hideous but conceivable scenario under which he could even end up brokering a deal that would place Russian (and even Iranian?!) troops in Syria to "secure" the chemical weapons.  That's obviously bad news for the US and a big score for those who oppose us.

Finally, aside from the lowest of the low information voters, Americans themselves will realize that because of a profoundly unwise bit of cowboy talk, Obama wanted to drag Americans into military action; sought to bring in Congress to cover his own political tail; and then backed down when it became clear he was going to lose big.  His domestic political adversaries already understand that whatever power Obama had to sway public opinion (not much, judging from ObamaCare), it no longer exists.

The sad fact -- and a testament to the Obama administration's total incompetence -- is that this altogether awful outcome is one of the best alternatives at this point.

It is almost impossible to remember the popularity this president enjoyed at his first inauguration -- and the high hopes so many Americans had for him.  His tenure has been disappointing from the first; now it is a dangerous fiasco.