Congressional Democrats Had an Opportunity to Formally Condemn Mob Violence. They Squandered It. 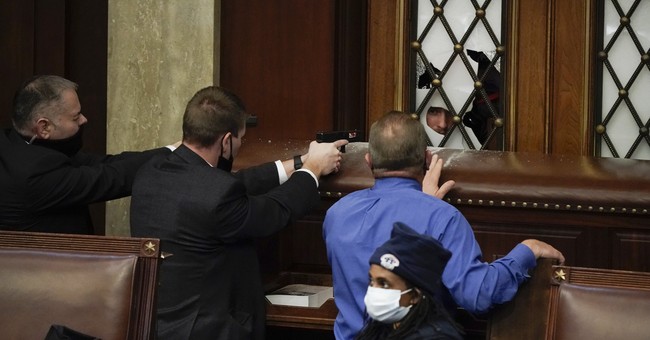 Months ago, congressional Democrats had the opportunity to condemn the type of mob violence they themselves fell victim to on Wednesday after a mob of angry Trump supporters stormed the U.S. Capitol and ransacked offices.

Following months of downplaying and justifying left-wing riots, Democrats blocked a Republican resolution in July that condemned mob violence. The Federalist's Jonah Gottschalk made the recollection.

The bill, which was spearheaded by Utah Sen. Mike Lee, R-Utah, came about after an unarmed Utah man was murdered by a mob of left-wing activists. At least 30 people, ranging in age from 14-77, were killed in largely left-wing riots in summer 2020.

Lee’s resolution offered a statement of support for peaceful protest, while condemning violence and the desecration of monuments.

“A non-binding resolution is the tiniest first step of a response,” Lee read as he introduced it. “We need to do much, much more… but in this divided political moment,… showing that Senate Republicans and Senate Democrats are able to speak with one voice against woke mob violence and in defense of equal justice and civic peace would be a welcome step.”

Yet the bill was killed upon landing by Senate Democrats. Sen. Bob Menendez, D-N.J., who spoke immediately after Lee, alleged that “the resolution reeks of supremacism. Reeks of supremacist views. And it seeks to mischaracterize overwhelmingly peaceful protests across the nation.” He then proceeded to poison pill the legislation by announcing the bill would only be passed if it specifically condemned President Donald Trump.

Lee attempted to compromise, saying he was willing to include the section condemning all politicians who incite any violence without specifically naming any. Menendez refused to budge, and the resolution died.

The speed and force in which Republican lawmakers condemned Wednesday's riot is a standard to which Democrats should aspire, given their failures to forcibly condemn and stop the months-long carnage unleashed by leftists loons in cities across America last year. The media gives Democrats the privilege of separating their peaceful protesters from their rioters -- Black Lives Matter is 93 percent peaceful! -- but want to hold all conservatives complicit for Wednesday's riot.

There should be one standard when it comes to political violence: none. But Democrats said no to that.