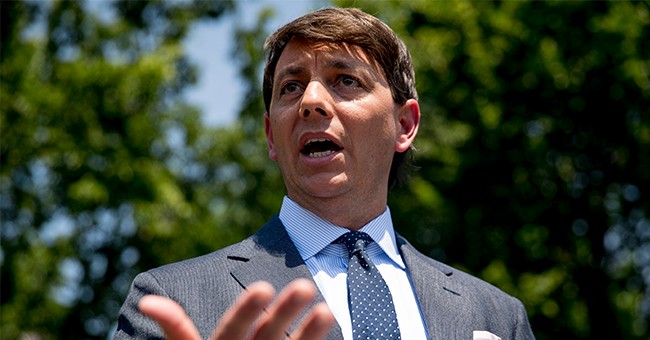 Twitter's one-sided election interference is off the charts as the November election draws near. On Thursday, just hours before the final presidential debate between President Trump and Joe Biden, Twitter suspended the account of Trump campaign Press Secretary Hogan Gidley.

Fox News reports that Twitter suspended Gidley after the Trump campaign press secretary tweeted that he had received an official ballot in the mail addressed to someone who hasn't lived at his address for several years.

"Got ‘my’...uh wait...no…”Daniel’s” ballot in the mail?!? Who is that? Apparently it’s a former tenant who hasn’t lived in the unit for 8 YEARS!!! But yeah, sure...the mainstream media is correct...unsolicited vote-by-mail is ‘totally safe.'”

He attached a screenshot of an envelope postmarked from the D.C. Board of Elections and marked “Your Official Ballot.” Separately it was marked “Official absentee balloting material -- first-class mail.”

Gidley was temporarily suspended by Twitter for violating the social media platform’s rules -- specifically those about “violating our rules against posting misleading information about voting.”

“I, like many other Americans, received a ballot in the mail that was not meant for me, and that proves what the president has been saying is one hundred percent correct -- that there are serious issues with the Democrats’ plan for universal, unsolicited mail in voting,” Gidley told Fox News.

“Irrationally, inexplicably suspending my Twitter account simply for tweeting about the incorrect ballot is completely insane, and it won’t cover up the fact that Democrats changing the way we vote just weeks before an election is dangerous and fraught with the potential for massive fraud,” he said.

Fox News was told by the Trump campaign that Gidley is appealing the decision and does not plan to delete the tweet in question.

Twitter censored a bombshell news story from the New York Post last week revealing emails showing that Joe Biden met with a Burisma associate of Hunter Biden's, which Joe Biden had previously denied. Of course, the only value Hunter Biden could possibly provide was access to his father, but such corruption is something Joe Biden has denied categorically.

A whistleblower, a retired U.S. Navy lieutenant and former Biden family business associate, turned over a trove of evidence on Thursday showing Biden also met with Chinese associates of Hunter and Jim Biden, the former vice president's brother. The whistleblower says Joe Biden was indeed the recipient of payments from Hunter's business associates. So that's how Joe Biden, a career politician, got so wealthy.