Prosecutor in Oklahoma Charges Three Rioters With Terrorism: 'This Is Not Seattle' 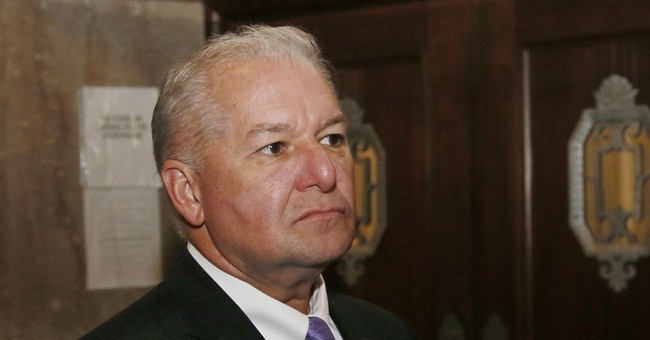 Charged in two terrorism cases was Isael Antonio Ortiz, 21, of Welch. He is accused of burning an Oklahoma County sheriff's van May 30 and attempting to burn a bail bonds business "along with a large crowd of other individuals."

Charged with him in the terrorism case over the burned van was Eric Christopher Ruffin, 26, of Oklahoma City. Police reported he encouraged the "wanton destruction" and recorded it on Facebook Live. He is quoted from the Facebook video as saying every single one of those that kill Black people need to die and "that's what happens when you got numbers outside."

Also charged with terrorism in the damage to CJ's Bail Bonds was Malachai Davis, 18, of Edmond. He was identified as a suspect from a Facebook video that shows him with brass knuckles on a bloody hand outside the bail bond business. He is accused of breaking the windows.

"This is not Seattle," the district attorney said Friday. "We're not putting up with this lawlessness here."

"Several people were carrying flags that were identified as belonging to the following groups: Antifa, Soviet Union (communism), American Indian Movement, Anarcho-Communism (solid red) and the original Oklahoma flag ... currently adopted by Oklahoma Socialists," police noted in court documents filed along with the charges, as reported by The Oklahoman.

The district attorney has also charged others with various offenses, including incitement to riot and assault and battery upon a police officer.

After weeks of violent protests, there are signs that calls for law and order are finally being heard. On Friday, President Trump signed an executive order instructing federal prosecutors to charge those who seek to destroy federal property to the fullest extent of the law. On Saturday, the Justice Department announced charges against four individuals in connection with the attack on the Andrew Jackson statue in D.C. earlier this week.

Meanwhile in Seattle, the CHOP, previously referred to as the CHAZ (Capitol Hill Autonomous Zone), the lawless area established by rioters and anarchists weeks ago, is still in existence at time of this writing. There was speculation that authorities were planning to finally clear the streets of the CHOP encampment on Sunday, but protesters say they are refusing to leave until their demands are met.

Smart for the district attorney to get ahead of this insanity.