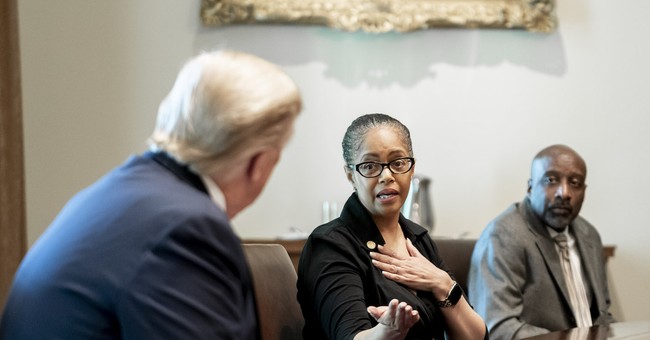 Michigan State Representative Karen Whitsett (D-Detroit) has recovered from the Wuhan coronavirus. Now, the lawmaker faces a censure from her Democratic colleagues for crediting Trump for her recovery.

Detroit Rep. Karen Whitsett says she was experiencing the worst symptoms associated with the coronavirus before she took the drug hydroxychloroquine. If it weren't for President Trump, Rep. Whitsett says the drug wouldn't have been accessible to patients like herself. Less than two hours after taking hydroxychloroquine, the lawmaker said she began feeling the first signs of relief.

"If President Trump had not talked about [hydroxychloroquine], it would not be something that's accessible" in Michigan "because of an order that was put down in my state," Whitsett explained on Fox News earlier this month.

With no approved therapeutics to treat the Wuhan coronavirus, Trump and many coronavirus sufferers were hopeful when early evidence suggested hydroxychloroquine may be an effective treatment against the disease. The best part, the drug is well-known to be safe and already FDA approved for the treatment of other ailments, like lupus and malaria. Inexplicably, Democratic Governor Gretchen Whitmer moved immediately to block Michiganders from gaining access to the potentially life-saving medication.

Now that Rep. Whitsett has praised Trump, her fellow Democrats are furious with her. The 13th Congressional District Democratic Party Organization plans to vote on Saturday to formally censure the first-term lawmaker for her honest remarks about the president.

The censure will cost Rep. Whitsett the organization's endorsement this election year and bar the lawmaker from participating in the group's activities for the next two election terms.

Responding to the news on Twitter, Donald Trump, Jr. called the censure "a joke," adding "the narrative can only be against Trump and if you break those rules the left will turn on their own."