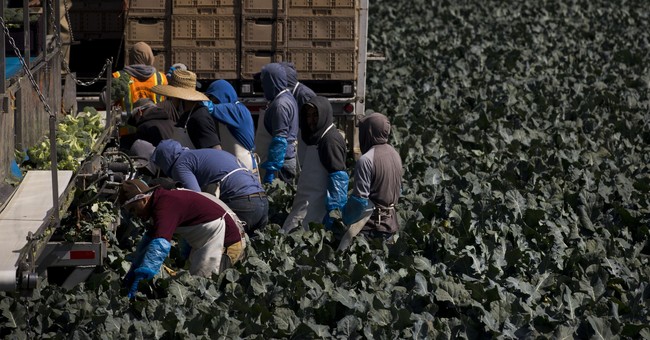 A new report reveals that White House officials are currently mulling a new immigration proposal that would increase the number of foreign workers in the United States. The new, smaller proposal comes after a bigger proposal put forward by the administration last May failed to gain traction on Capitol Hill. POLITICO reports the talks began soon after the House passed legislation introduced by Rep. Zoe Lofgren (D-CA), an impeachment manager, providing a pathway to legal status for illegal aliens farm workers.

"I can’t wrap my head around why some Republican senators and administration officials are urging President Trump to embrace a guest worker expansion in an election year, or even worse — an agriculture amnesty bill drafted by an impeachment manager," said RJ Hauman, government relations director at the Federation for American Immigration Reform.

The guest worker negotiations are separate from ongoing, more expansive talks about a 600-page draft bill that would grant permanent status to more high-skilled, well-educated immigrants while reducing the number for those who enter the U.S. based on family ties. Trump unveiled the contours of that proposal in May but has failed to garner support for the offer.

Since then, Trump has decided a narrow deal to bolster various industries like agriculture — which has been coping with a shortage of workers and the fallout from Trump’s trade wars — could be worthwhile even if it risks alienating some in his base, said one of the sources, who has spoken to the White House about the issue.

Talks about the guest worker proposal have, at times, touched on whether to also offer permanent legal status to the 800,000 Dreamers — immigrants who came to the U.S. illegally as children — according to two of the people familiar with the negotiations. But it's unclear whether any deal would include language addressing Dreamers, those people said.

It seems like the business community could use the money it spends endlessly lobbying our politicians for cheap labor to finally mechanize their workforce or simply offer higher wages to attract the workers they need.