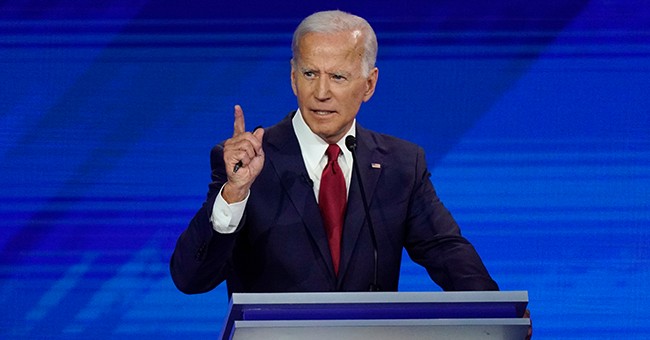 Joe Biden brought his circus of a campaign to Texas on Friday. He didn't do anything super creepy, make some embarrassing gaffe or lose his cool during a question about Burisma. Well, maybe he did. I didn't see the whole campaign event. But I do know that Joe Biden told a big fat lie during his campaign stop.

"We need somebody with a proven ability to bring people together, and do the hard work of getting legislation passed," Biden told a crowd of his supporters. "I've done that," Biden insisted. "I've done that before. Finding Republican votes for the Recovery Act, Obamacare -- helping us from falling into a great depression."

Not a single Republican member of Congress voted for Obamacare, therefore Joe Biden lied about "finding Republican votes" for the much-hated legislation. For the record, Republicans did find 34 House Democrats to join with them in voting against Obamacare.

Biden has managed, however, to bring people together when it comes to lingering questions about his son's lucrative salary from a Ukranian energy company while Joe Biden oversaw Ukraine affairs as vice president. Biden's response to his Ukraine scandal has been a mix of finger-waving indignation and personal attacks. When an Iowa voter asked Biden about his son profiting off his father's political career, Biden responded by calling the voter a "damned liar" and making fun of his weight. As of last week, Joe Biden was still unable to explain what his son was doing for the Ukrainian energy company to justify his son's more than $80,000-a-month salary. That kind of money buys you access to the vice president.

The candidate's increasing number of lies, creepy moments and gaffes have also fueled concerns over the candidate's age and fitness for the highest political office in the land. If Biden wins in 2020, he will become the oldest president ever elected in our nation's history.