Um, Did Yovanovitch Lie In Her Testimony? 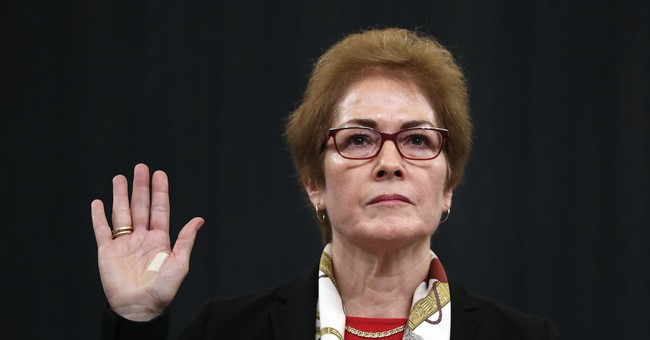 In her opening statement before a House impeachment hearing on Friday, Yovanovitch said, "although I have met former vice president Joe Biden several times over the course of our many years in government service, neither he nor the previous administration ever raised the issue of either Burisma or Hunter Biden with me."

But later on, when Rep. Stafanik finally made it pass Chairman Adam Schiff, Stefanik asked Yovanovitch about her previous deposition testimony where she detailed exactly how the Obama State Department had prepared her to handle the issue of Burisma and Hunter Biden during her Senate confirmation hearings.

"The first time you personally became aware of Burisma was actually when you were being prepared by the Obama State Department for your Senate confirmation hearings, and this was in the form of practice questions and answers," Stefanik told the former ambassador. "This was your deposition. And you testified in this particular practice Q & A with the Obama State Department, it wasn't just generally about Burisma and corruption. It was specifically about Hunter Biden and Burisma. Is that correct?"

Yovanovitch answered, "Yes. It is."

So was Yovanotich lying during her opening statement or during her answer to Rep. Stefanik?

Stefanik then continued, "So for the millions of Americans watching, President Obama's own State Department was so concerned about potential conflicts of interest from Hunter Biden's role at Burisma, that they raised it themselves while prepping this wonderful ambassador nominee before her confirmation."

Stefanik pointed out that House Democrats continue to cry foul when Republicans bring up Hunter Biden and Burisma even though the Obama State Department had the exact same concerns.

Why did the former ambassador deny this in her opening statement?

Contrary to her opening statement, former Ambassador Marie Yovanovitch later admitted under questioning that Obama-Biden officials prepared her to answer questions about Hunter Biden's role on the board of Ukrainian gas company Burisma during her 2016 confirmation hearing. pic.twitter.com/GrGOxThFyC