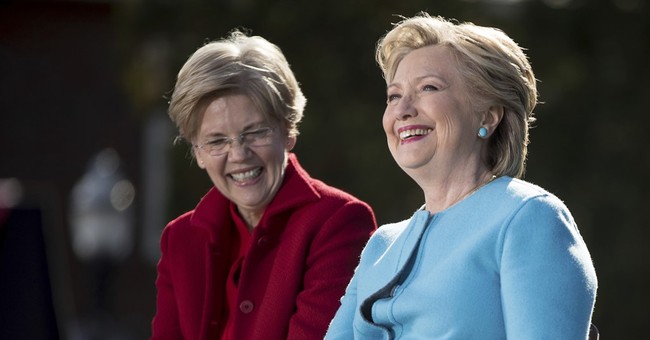 The Biden campaign has been busy writing letters to The New York Times, Facebook, Twitter – anyone who dares to repeat the “conspiracy theory” that Hunter Biden made millions as a board member of a Ukrainian energy company that was being investigated by a prosecutor who Vice President Joe Biden got fired by blackmailing the Ukrainian government.

When Democrats and the media don’t want something investigated, they call it a “conspiracy theory.” This is in contrast to the “Russian collusion” nonsense they believe about President Trump, which can never be investigated enough -- and we are always moments away from finding that smoking gun!

A Trump ad -- which ran on Facebook, Twitter, and YouTube – repeated inconvenient facts about the Bidens, and Democrats have been going crazy ever since! Both the Biden campaign and Sen. Elizabeth Warren are calling on Big Tech to step up censorship and prohibit the president from engaging in protected political speech.

Elizabeth Warren has an ongoing feud with Facebook over its policies protecting first amendment rights. Warren said in a tweet, "Facebook changed their ads policy to allow politicians to run ads with known lies -- explicitly turning the platform into a disinformation-for-profit machine."

Warren of all people should be defending the rights of politicians to tell lies. For decades, she falsely claimed to be a Native American. And more recently, she can't stop repeating the lie about losing a job because she was pregnant.

In a bizarre decision, Warren then decided to test the waters of Facebook’s tacit embrace of the First Amendment by running a political ad supporting Donald Trump. The ad falsely claims that Facebook CEO Mark Zuckerberg had endorsed Trump for president. "We intentionally made a Facebook ad with false claims and submitted it to Facebook's ad platform to see if it'd be approved. It got approved quickly and the ad is now running on Facebook. Take a look."

We intentionally made a Facebook ad with false claims and submitted it to Facebook’s ad platform to see if it’d be approved. It got approved quickly and the ad is now running on Facebook. Take a look: pic.twitter.com/7NQyThWHgO

Warren then proceeded to lie about TV networks censoring lies in political ads. "If Trump tries to lie in a TV ad, most networks will refuse to air it," Warren claimed. But even so-called "fact-checkers" were quick to point out that federal law requires broadcast networks to run campaign ads. So Warren lies even when she's accusing other people of lying.

And Warren's claim that "Facebook already helped elect Donald Trump once," sure sounds like a conspiracy theory to me. In Warren's mind, all this Trump-being-president stuff could have simply been avoided if Facebook had done a better job censoring "fake news" back in 2016.

In a speech at Georgetown University last Thursday, Facebook CEO Mark Zuckerberg gave a strong defense of his company’s decision not to censor political speech on its platform. “I know many people disagree, but, in general, I don’t think it’s right for a private company to censor politicians or the news in a democracy,” Zuckerberg told the crowd. “As a principle, in a democracy, I believe people should decide what is credible, not tech companies.”

For instance, people decided Warren's claims of Native American ancestry were not credible years before Warren revealed her DNA results.

"While I worry about an erosion of truth, I don't think most people want to live in a world where you can only post things that tech companies judge to be 100% true," Zuckerberg said.

Warren was outraged at Zuckerberg's speech. She doesn't want people hearing what the Republicans have to say! Elizabeth Warren wants a monopoly on telling lies.

Mark Zuckerberg& - 39;s speech today shows how little he learned from 2016, and how unprepared Facebook is to handle the 2020 election. https://t.co/2JHCuihexR

Kamala Harris is simply calling for President Trump to be banned from Twitter.

In a statement, a Biden campaign spokesperson said, "Zuckerberg [had] attempted to use the Constitution as a shield for his company's bottom line, and his choice to cloak Facebook's policy in a feigned concern for free expression demonstrates how unprepared his company is for this unique moment in our history and how little it has learned over the past few years."

Democrats need Facebook to know what the liberal media figured out years ago: If Republicans are allowed to speak, people will start listening to them. And if Big Tech caves into demands from Democrats to censor their political opponents, Big Tech really will have a role in deciding the next president.