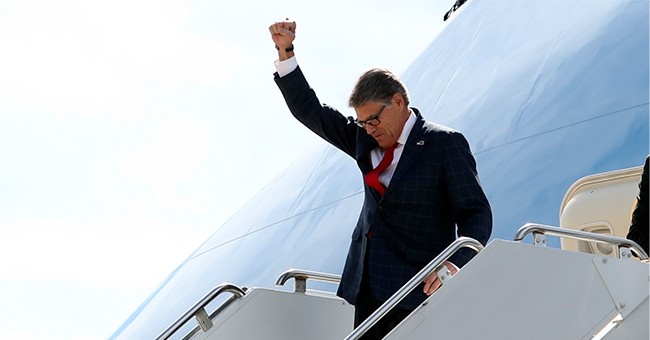 UPDATE: President Trump said Rick Perry will be departing "at the end of the year," and said the secretary of energy has done a "fantastic job." The president also said the administration will be announcing Perry's replacement soon. The president suggested Perry had a hand in picking his replacement and said it will likely be a "he in this particular case."

JUST IN: President Trump says Energy Sec. Rick Perry is "going at the end of the year." https://t.co/SvZxUjgAQb pic.twitter.com/FOO8MElVMp

The former Texas governor was in his home state Thursday when he reportedly told President Trump he will be resigning his position as secretary of energy. Earlier reports said the secretary was planning on leaving the administration, but Perry did not confirm those reports. Perry did not state specifically what day he will be leaving the administration.

.@SecretaryPerry is a good man & good friend who has devoted his life to serving his country & the great state of Texas. He went from being Texas' longest-serving governor to heading @ENERGY, where he was a leading advocate for US energy, including liquefied natural gas.

George P. Bush thanked Perry "for his tremendous service to our State and Country."

If the news is true I want to join the chorus of Texans that want to thank @SecretaryPerry for his tremendous service to our State and Country—gig em’ friend and hope to buy you a cone soon at Sandy’s!

Former California GOP Chairman Ron Nehring said he has "a great deal of respect for Rick Perry," calling him "an honorable and formidable man."

I have a great deal of respect for Rick Perry. Met with him many times during my tenure as @cagop chairman. He is an honorable and formidable man. I look forward to what he has to say. https://t.co/TRwJEWnmao

Rick Perry is one of the Trump administration's original cabinet members.