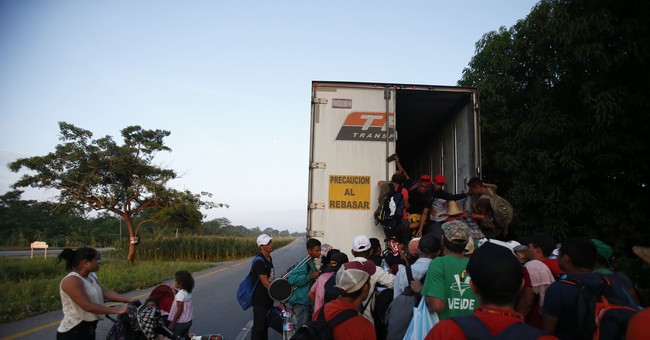 The White House announced the U.S. Customs and Border Protection Agency stopped a semitrailer on Monday carrying 32 illegal aliens inside. The refrigerated trailer was stopped at a checkpoint, and the internal temperature was discovered to be a chilly 47 degrees.

Yesterday at an immigration checkpoint, @CBP agents found 32 illegal aliens locked in a semitrailer, where it was 47 degrees inside.

Smuggling humans in commercial vehicles is not only unlawful: It places the passengers in extreme danger. pic.twitter.com/g7AuCPhtP0

A canine alerted agents to the vehicle, and x-rays at a secondary inspection point revealed the presence of people inside the trailer. Agents discovered 32 illegal aliens, and the two truck drivers were taken into custody. Border Patrol agents say the illegal immigrants were ill-prepared for the cold temperature of the trailer, noting that most of them “were wearing short t-shirts,” according to KVOA Tucson.

Semitrailers are a common and dangerous way for human smugglers to transport illegal immigrants into the U.S. In August, seven illegal aliens were found in a padlocked semitrailer. The month before, 53 illegal immigrants were discovered in a semitrailer that had an internal temperature of 105 degrees Fahrenheit.

Last year, Border Patrol agents stopped another semitrailer carrying 32 illegal aliens. And a couple months before that, ten illegal immigrants died from extreme heat in the back of a semitrailer found in San Antonio. The driver in that incident was sentenced to life in prison without the possibility of parole.