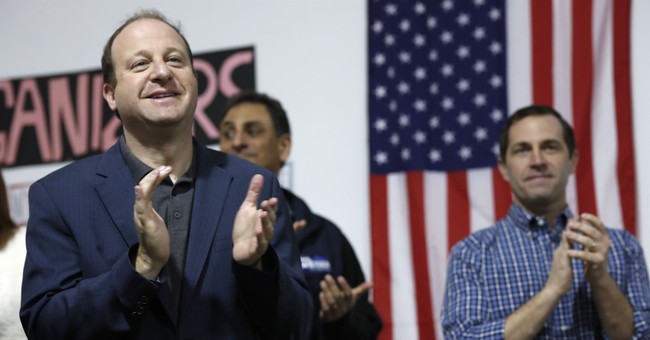 As voters head to the polls today, the state of Colorado is poised to make history. If elected, Democrat Jared Polis will become the nation’s first openly gay male governor.

While the candidate has remained silent about his personal life throughout the campaign season, the subject is something Polis appears to feel quite strongly about.

“I think it really gives Colorado an opportunity to stick a thumb in the eye of Mike Pence, whose view of America is not as inclusive as where America is today,” Polis told Colorado Democrats during a speech back in June.

"I really think that we are at our best as a nation, as a society, when our elected officials are fully representative of the people they're elected to work for," Polis told ABC News this week. "That means we should have our communities of color represented, women represented, the LGBTQ community represented. And the more diversity we have in elected leadership, responsible positions, I think the better result we'll have.”

If Polis wins Tuesday, he and his partner, along with his two children, will move into the Colorado governor’s mansion.

He will also become part of what some are heralding as this year’s “rainbow wave.” The phrase refers to the number of candidates across the country who identify as LGBTQ.

Christine Hallquist, a Democrat from Vermont, is the first-ever transgender woman (Hallquist was born a biological male) to run for governor on a major party ticket. Oregon’s governor Kate Brown is up for re-election this year, and identifies as bisexual. And ABC News reports that there are 22 additional candidates belonging to the LGBTQ community, running for House and Senate seats throughout the country.

Polis however doesn’t see his potential for making history as particularly surprising for Colorado.

The former Colorado State Board of Education chairman is currently serving in the US House of Representatives, having already made history by being the first openly gay father to be elected to Congress. Polis made news in 2015 when he famously suggested that colleges ought to expel students accused of sexual assault, without proof of guilt.

“It certainly seems reasonable that a school for its own purposes might want to use a preponderance of evidence standard, or even a lower standard,” Polis once said at a hearing on campus sexual assault prevention. “Perhaps a likelihood standard.”

“If I was running a [college] I might say, well, even if there is only a 20 or 30 percent chance that it happened, I would want to remove this individual,” added the congressman.

As for 2018, Polis is running on a strongly progressive platform, promoting full-day preschool and kindergarten for all public schooled students in Colorado, and universal Medicare. And in spite of the potential historical significance of his sexual orientation, Polis remains confident that Colorado voters aren’t too concerned about it.

"I think what the people of Colorado care about is: who's going to make my life better?" Polis said. "They don't care about who you are and who you love."