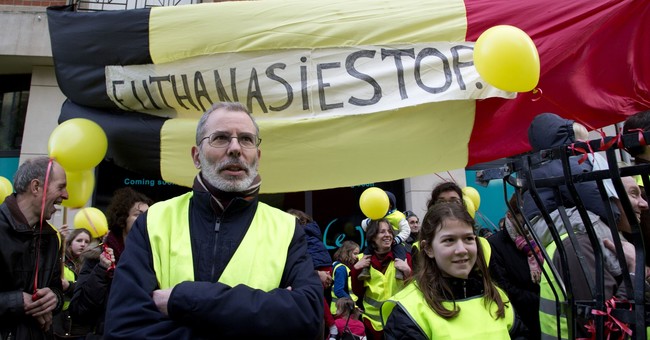 According to an article in The Brussels Times, a report from the Federal Commission for Euthanasia Control and Evaluation has revealed that euthanasia in Belgium is up 13%.

More striking than the general uptick in numbers, however--most of that increase represents patients between the ages of 60 and 89 years old, the majority having cancer--is the fact that in the years 2016 and 2017, three children also opted in to legally assisted suicide.

While euthanasia in Belgium was legalized for adults in 2003, it wasn’t extended to minors until more recently, in 2014. The law allows children of any age to procure a death via lethal injection, provided they have parental consent and an agreement is reached with a doctor and psychologist.

CNN reported that shortly after the first child was killed under the expanded age laws (in 2016), Belgian senator and supporter of euthanasia Jean-Jacques De Gucht said, "I think it's very important that we, as a society, have given the opportunity to those people to decide for themselves in what manner they cope with that situation."

Since that time, it is reported that two additional children have consented to having their lives taken.

But some are asking whether a child is even capable of rationally making such a choice.

Catholic News Agency reports that, back when assisted suicide was first expanded to minors in Belgium, John Haas (governing member of the Vatican’s Pontifical Academy for Life) declared the new development to be “dreadful.”

Haas went on to say, “They are appealing to 'rights of children' to make these determinations, but children aren't capable of making those types of self-determinations. So what is really going to happen is that, under the rules of children making these decisions for themselves, parents and physicians are going to be making those decisions, for children, to eliminate them because they've become excessive burdens on them and on the rest of society.”

Since the release of the report this week, some of Belgium’s legislators have expressed concern about the contents. Crossbench peer Lord Carlile told the Catholic Herald that he was “profoundly shocked” not only by the children who’ve died, but also by the skyrocketing rates of euthanasia in general, which have increased nearly tenfold since assisted suicide was first legalized in Belgium in 2002.

“The euthanasia of those children is plainly contradictory of the European Convention on Human Rights,” Carlile said.

“No parent and no public authority has the power to take away the life of anyone who is a child, whoever they are.”

Only three countries in Europe presently allow for euthanasia: Luxembourg, the Netherlands, and Belgium. The Netherlands also permits children (though only over the age of 12) to obtain a legally assisted suicide. Belgium has no age restrictions.

According to Lord Carlile, “Belgium is perhaps the state that is causing the greatest concern in Europe about the way it administers euthanasia.”

If the recent report coming out of Belgium is any indication, those concerns may not be so unfounded.