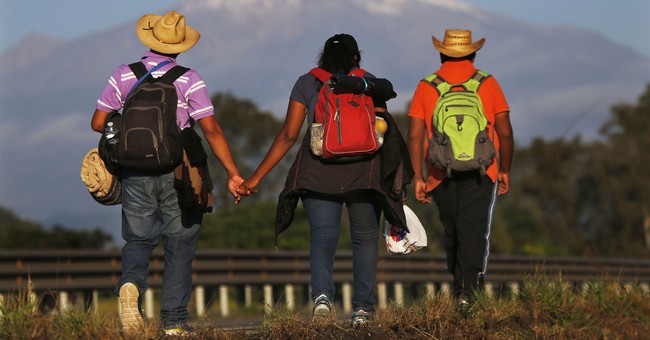 Cochise County, Arizona Sheriff Mark Dannels (R), the Chairman of the Border Security Committee, on Friday slammed President Joe Biden's decision to stop the construction of the border wall along the United States' southern border. According to Dannels, the decision creates an entryway for the drug cartels to enter the country.

“When President Biden rescinded the emergency order on the southwest border, it stopped resources and stopped construction on our border. As a result of that, one area where the fence is not complete, we get five or six groups a day coming across there. It’s opened up the border," he explained to Fox News' Brian Kilmeade. "This administration owns this decision and what it’s doing is it’s forcing us back to 2019, when we had the largest, what I call crime scene in the country, to include the largest humanitarian situation going on.”

Fox News displayed a handful of pictures of people crossing the border, something Dannels said the department obtained off the security cameras they use in conjunction with Customs and Border Protection.

"With the chaos going on at the border, based on these administrative decisions, and we saw it in 2019, Brian, when 114 countries breached our border in the first nine months, a thousand gang members, 822 assaults on agents, 271 deaths on our border, this is a crime scene," he said bluntly.

One important point Dannels made was the health risk that's taking place with the number of illegal crossings. Those who illegally enter the country are not being tested for the Wuhan coronavirus, something that goes against the Centers for Disease Control guidelines.

"They're being released without being tested into communities," the sheriff said.

What's concerning is Dannels said the talks between Biden and Mexican President Andrés Manuel López Obrador could create an influx of illegal aliens, to the tune of 600,000 to 800,000 per year.

Before the presidential election kicked into high gear, the sheriff said his county's cameras alone would detect between 300 to 400 illegal aliens per month. That number jumped to 1,200 a month in Aug. 2020. In December, that number increased to more than 2,500 illegal aliens and included 500lbs of illegal drugs.

The numbers, Dannels said, are increasing back to 2019, when the Central American caravans flocked to the United States. Those numbers tapered off because of President Trump's immigration policies.