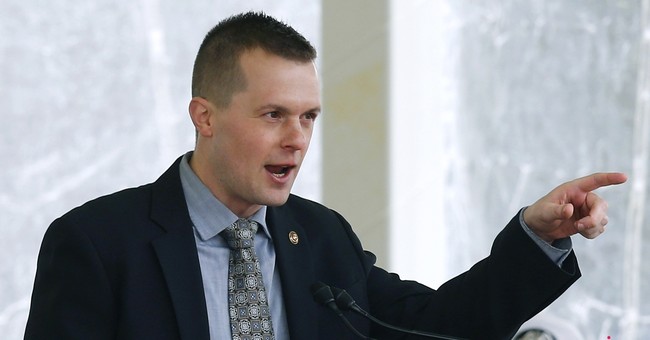 Golden said he voted against the package because the majority of the bill is filled with unnecessary pork. It's the same issue Republicans have taken with the bill.

The Oregon congressman said that he previously supported the $4 trillion spending found in the CARES Act but he refuses to back "trillions more in funding that is poorly targeted or in many cases not necessary at this moment in time."

“Outside of the critical funding priorities — unemployment assistance and vaccine and testing aid — the bulk of this bill falls into two categories," Golden explained. "The first category is a series of spending provisions that duplicate ongoing COVID assistance programs that Congress has already funded or are poorly designed and wasteful of public resources. The second category of spending is a series of policies worthy of consideration under regular order but that do not belong in an emergency spending bill."

He pointed out that there is lag time between funding Congress passes and the time it takes for states and agencies to utilize the cash. When Congress passed the second relief bill in December, $40 billion was allocated for assisting parents with child care needs. Maine didn't receive the funding until Feb. 4.

"As with other programs, I believe it is irresponsible to quadruple our investment before we more fully release existing funds and determine what will be needed to help us through the final stages of the pandemic," he explained.

Golden had similar concerns with school funding, which provides $170 billion to K-12 as well as colleges and universities. Despite that, most schools across the nation are still being conducted virtually.

"The Congressional Budget Office estimates that less than 8 percent of this funding will be spent before the end of this school year, and only about a third in the next two years," he explained. In his home state of Maine, schools have yet to utilize the funding they received from the last relief bill.

When the December relief bill passed, SNAP benefits were extended until June 30. Instead of waiting a few more months to reevaluate whether or not to extend those benefits once again, the bill that passed on Saturday extends those benefits again, this time until Sept. 30.

"I am certainly open to supporting additional food assistance after June 30, should the circumstances warrant it, but I believe Congress should make that decision when the moment requires it," he said.

But the overarching issue Golden has is the same as Republicans: policy wish list items shouldn't be tied directly to COVID relief. They should be individual initiatives on their own.

“The second category of spending is a series of policies worthy of consideration under regular order but that do not belong in an emergency spending bill. This bill contains approximately $250 billion in these kinds of provisions, including a one-year expansion of the Child Tax Credit, a two-year enhancement of premium subsidies under the Affordable Care Act, and multiemployer pension reform," he said. "These are sensible — and in some cases bipartisan — policies on their own, and I would be likely to support them as standalone, paid-for legislation. However, using emergency spending legislation to enact these provisions is not a responsible way to make meaningful public policy that can stand the test of time."

The latest relief bill is headed to the Senate where it faces an uphill battle. Moderate Sens. Joe Manchin (WV) and Kyrsten Sinema have said they take issue with tying the federal minimum wage to emergency spending.